Which City in the World Truly Never Sleeps? 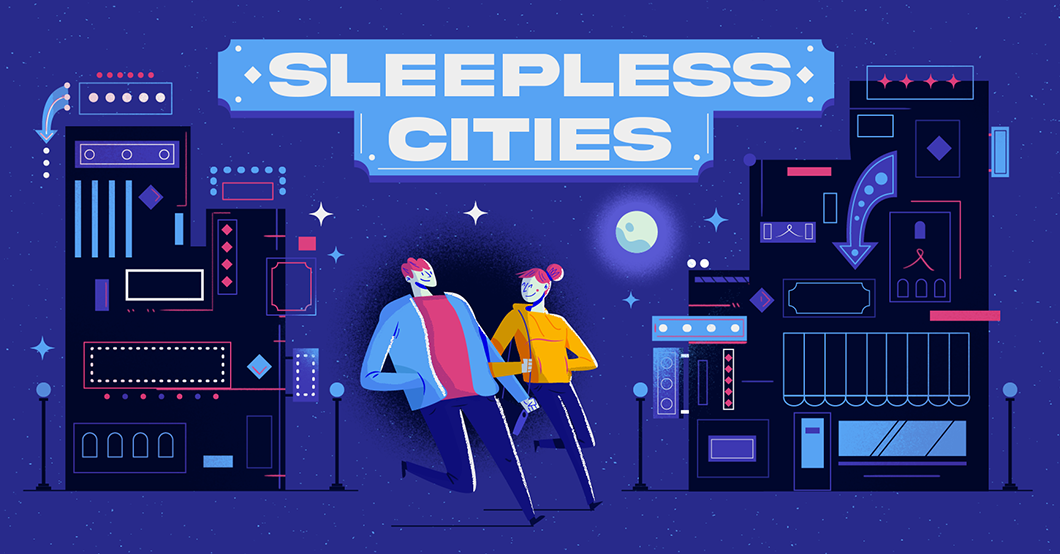 One last drink/dance/bite? We’ve all found ourselves out of time before we’re out of energy. Whether it’s a great night out you never want to end or an insomniac’s urge to get out of bed and have a dance, stumbling into an all-night venue feels like reaching the promised land.

But despite several cities’ claims to “never sleep,” finding a café after midnight or a club after 2 am can be a challenge.

Late night opening takes its toll on a city and shift workers’ health. It generates noise pollution – although not as much crime as you would expect. Increased alcohol abuse creates multiple knock-on effects and increases pressure on the emergency services, as well as creating long-term damage.

On the other hand, all-night culture creates a parallel city for non-mainstream groups, from queer communities to insomniacs to political outsiders. A thriving nightlife pulls a city together and boosts its reputation and economy.

One place that benefits from this effect is New York – the city most commonly associated with “never sleeping.” But in our new study, SimpleGhar has revealed that there are nine other cities with a stronger claim to all-night culture. We averaged the closing times of bars, clubs, cafés, and restaurants in 78 major world cities and converted these to a total score out of 100 so that we could rank them for non-sleepability. (You can check our full methodology at the end of the article.)

Cairo, Egypt, is the Real City That Never Sleeps

Our final results are available in this interactive table. Use the arrows to sort by overall rank or closing times for bars/clubs, restaurants, or cafés. And you can use the search box to find the city of your choice.

Eastern European and Asian cities dominate the top ten. In Athens and Belgrade, long summer nights beg to be enjoyed. Grabbing some food after the party is part of the Athenian lifestyle. Belgrade prides itself on the club scene, which developed with a sense of underground anarchy during a period of post-war chaos and identity-searching.

Cairo is one of just three global cities where the average nightclub closing time is 3 am or later (Miami and Montevideo stay open a little longer). The Egyptian capital has the world’s latest opening cafés and second-latest restaurants. On aggregate, that makes Cairo the latest-opening city in the world.

The climate and culture of the city have made late-opening the norm, with shops often open until midnight and entertainment lasting until dawn. “No one goes to bed at 10 o’clock,” reports one café manager. “This is the nature of Cairo.”

Our next chart details the fifty cities whose bars and clubs stay open the latest on average. Cairo is still up there, but you’ll get another dance or two in Montevideo and Miami.

Miami is known as a party city, ranking as TimeOut’s best city for nightlife in the US. A diverse population, sensuous landscape, and Latin influences are among the reasons for Miami’s dedication to the all-night party. If late-night alcohol has recently been curtailed on South Beach, the clubs themselves remain free to open until dawn.

Montevideo in Uruguay has the world’s second-latest opening bars and clubs. Like the people of Cairo, Montevideans are known as night owls. Both Montevideo and Cairo have late opening hours but also ranked highly on a previous study into late-night chats and flirting on social media.

Greek people typically eat dinner when the evening is well underway, between eight and nine pm, but restaurants tend to remain open until around midnight. This is the latest restaurant closing time in our study. Greek flavors already taste like a celebration in your mouth, and once you add the social aspect, nobody is in a hurry to finish. Greece is the homeland of Epicureanism and, since ancient times, dinner has been the most important meal of the day for savoring both long-prepared meals and lively discussion.

The country most commonly associated with late eating is Spain. But the Spanish city with the latest-opening restaurants is Barcelona – which figures just 20th in our study, with restaurants closing just before 11 pm on average. The Spanish culture of late dining is actually a hangover from the Franco era, when the dictator realigned the country’s time zone to match that of Nazi Germany despite the mismatch in sunrise/sunset times.

Our final chart reveals the 50 cities where cafés stay open the latest. Cairo and Belgrade are up there again. But the standout detail is the emergence of three Indian cities that rank low for late opening overall but are in the top 10 for late-opening cafés. Hyderabad, Mumbai, and Chennai all have average closing times between 10 and 11 pm. Café culture is booming in India with the rise of the youth and middle-classes set against a backdrop of low alcohol consumption.

Also jumping up the chart is Zagreb in Croatia. Zagreb is the 42nd latest-opening city overall, but number 13 for cafés with an average closing time of ten to ten. Coffee is a serious business across the Balkans – indeed, the café is where a lot of business is done. But it’s also a fundamental part of the social scene, and in hip and creative Zagreb, that means lingering over a cup until long after dark.

There’s something magical about nightlife in the city. Heightened by coffee, something stronger, or just the buzz and bright lights, there are connections to be made – if you know where to go (and how to get home). What’s the most special element of your city’s nightlife?

Closing times for cafes (inc. coffee shops) and restaurants were gathered from OpenStreetMap, while the closing times for bars and clubs were taken from the first four (4) pages of “Bars & Clubs” and “Dance Clubs & Discos” listings in each city’s Tripadvisor Nightlife section. In cases where the opening hours varied based on days of the week or months/seasons of the year, closing times were averaged across all the times available for each establishment.

The city rankings were compiled based on the score assigned to each city on the basis of how late, on average, bars & clubs, restaurants, and cafés close. The overall score has a maximum of 100 points and is based on three components, weighted as follows:

Data was collected in October 2021.