Futuristic Products by Tech Giants, Based On Actual Patents 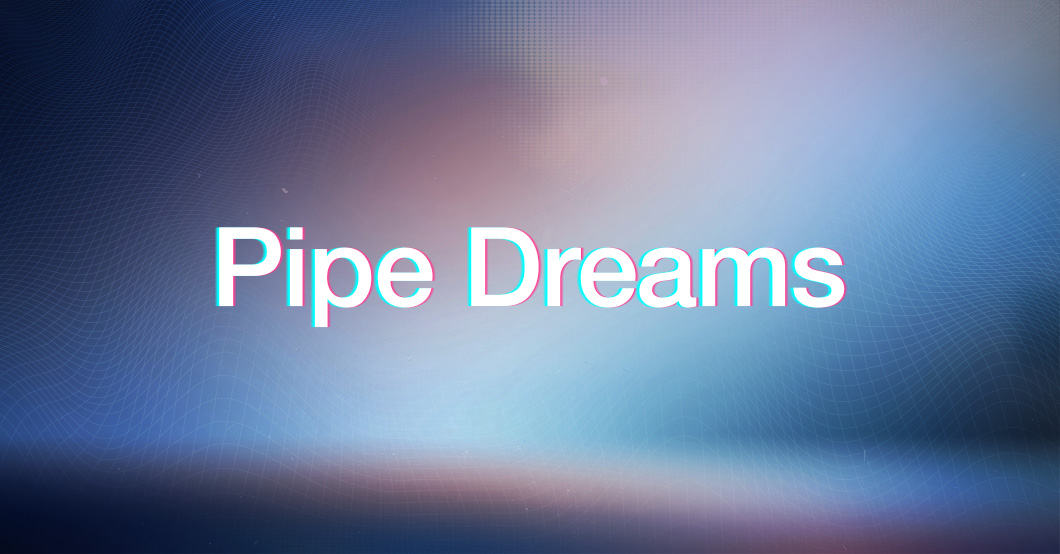 From the lifelike holograms used in the entertainment industry to the AI personalities that are found in millions of homes around the world, technology is advancing at a rapid rate.

Developments show no signs of slowing either. For every shiny new product launch, there are countless more innovations in the pipeline as the engineers of Silicon Valley, Beijing and Seoul continue to push the boundaries of what we think is possible.

Of course, not all of these products will see the light of day. Some ideas are too ahead of their time, while others simply prove to be unfeasible to produce. Yet by exploring some of the patented product concepts from the leading tech companies, we can take a glimpse at what the future of tech may one day look like.

With one eye on the future and their finger firmly on the pulse, SimpleGhar wanted to explore what some of the most exciting, patented products would look like if put into production. While we had to take a little creative license when interpreting the plans and coining the product names, these eight designs show what the biggest names in tech had envisioned for our not-so-distant future.

As Apple eyes up new developments in the gaming industry, they aim to enhance the usability and functionality of their handheld devices. The iMag Gaming Accessory kit consists of a range of magnetic accessories, allowing gamers to up the ante, switch up their screen and experience unrivaled gameplay control. 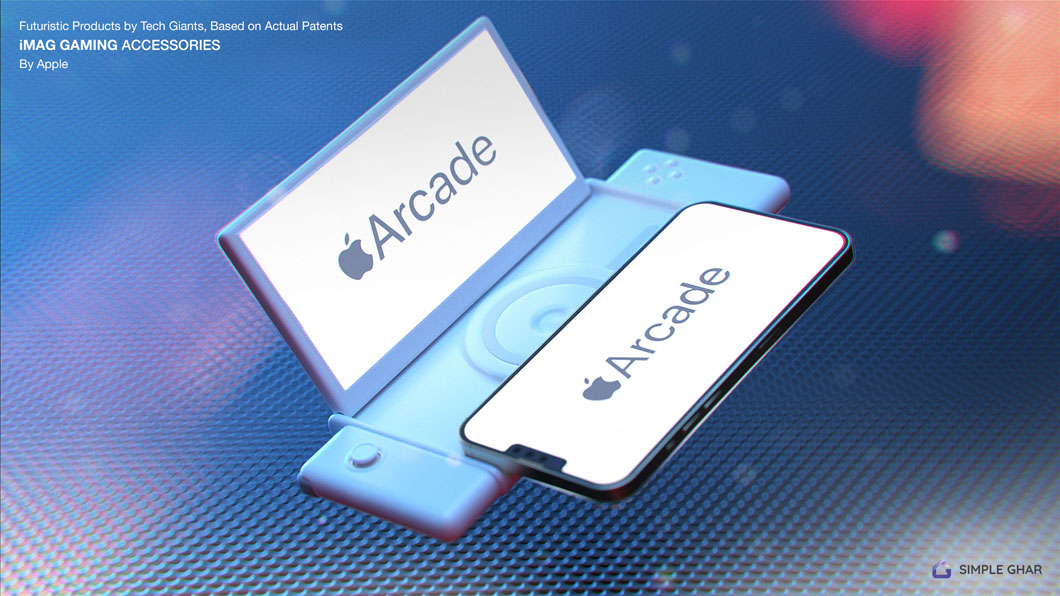 With an array of attachments in the pipeline, Apple is looking to reinvent the handheld gaming console. From tailor-made controllers and grips to screen projectors and stands, the iMag Gaming Accessory kit will enable gamers to configure their interface and control setup to best suit their gameplay. 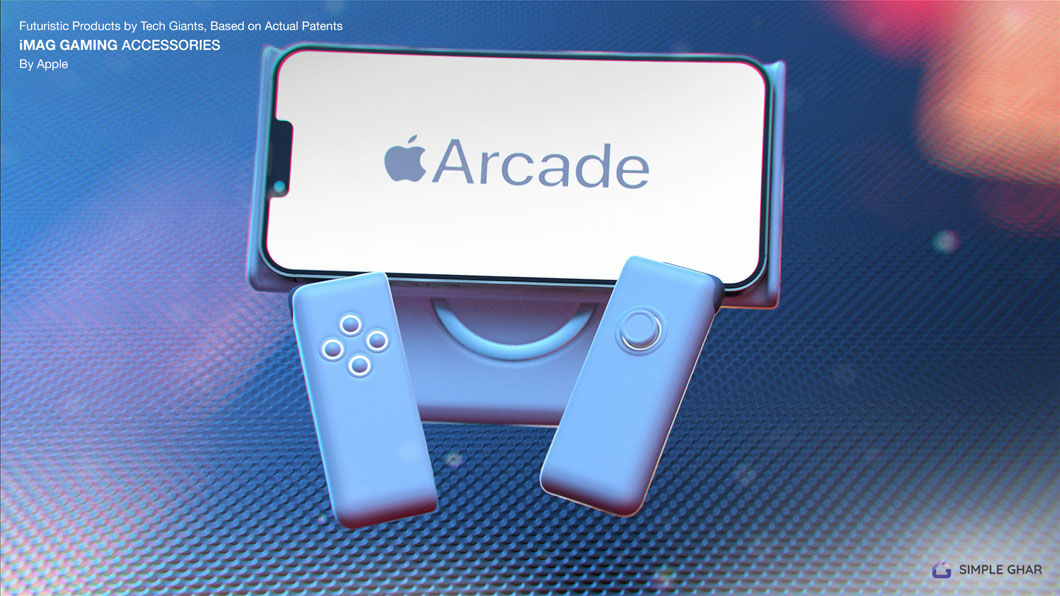 The varied accessories will attach magnetically to an Apple device, allowing users to interchange their setup depending on how they would like to play. This will heighten the gaming experience to new levels, as users will be able to create a bespoke setup for each game in their collection.

Whether you’re skyping your family, facetiming friends or jumping on aZoom meeting with a colleague, video calling has become increasingly commonplace in all of our lives. While it can help to bring people together, it’s not without its limitations. That is why Facebook is developing the Optical Drift, the levitating camera that knows no bounds, granting you the freedom to communicate as though in the room together. 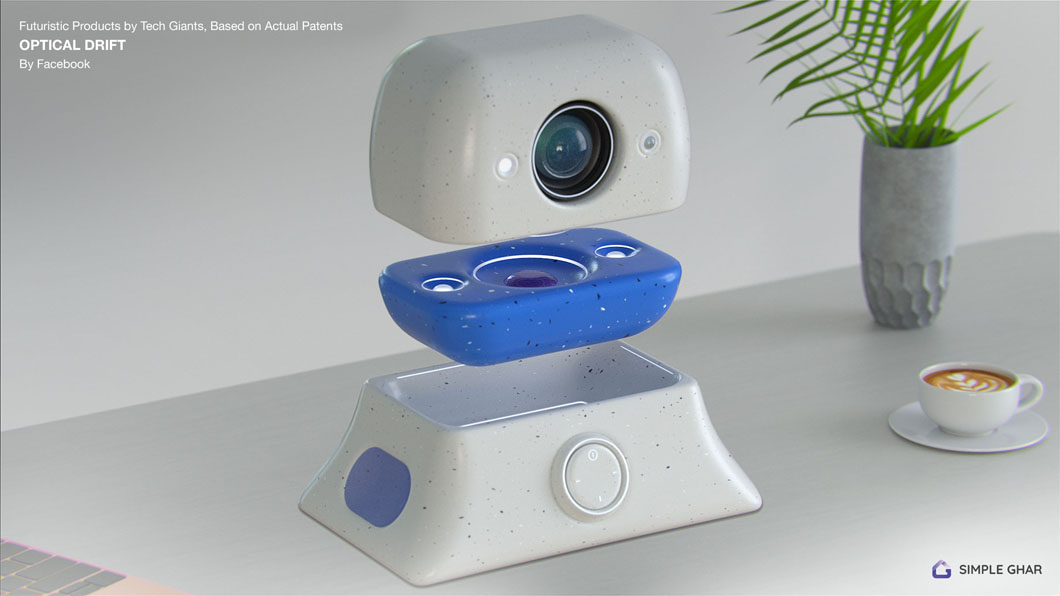 With the Optical Drift, Facebook is aiming to banish bad angles, lighting or sound and to rid video calls of the rigid and formal nature they can often impose. Unlike traditional video software, the Optical Drift will be totally hands-free and not be restricted by a fixed field of view, as you would find in a traditional webcam. 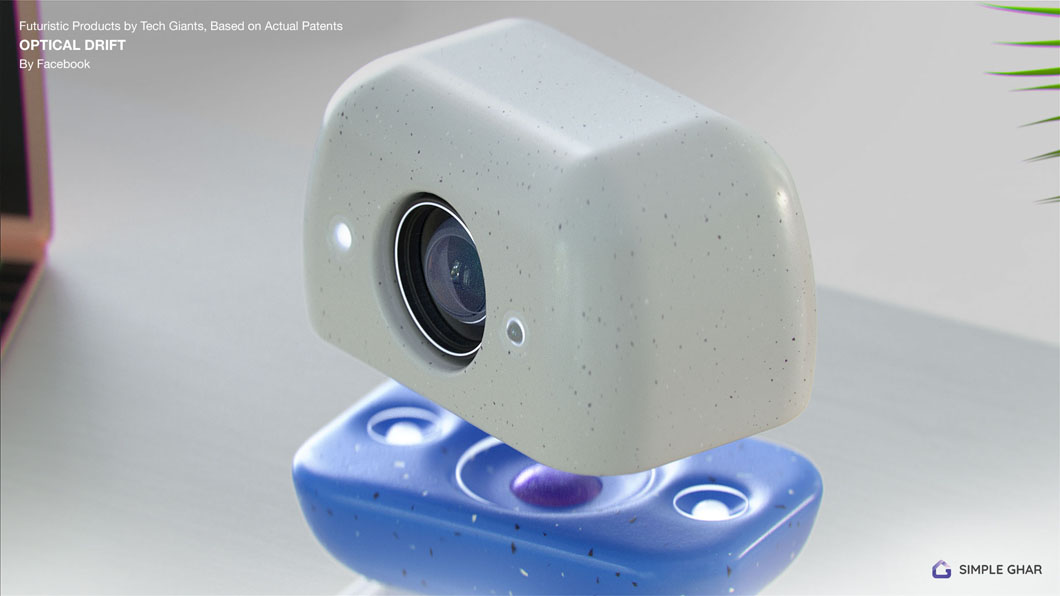 Instead, the camera will levitate above its hub using electromagnets, with the ability to rotate 360 degrees. The user simply has to set it up in a convenient location and then move freely in the knowledge that the camera tracks your movement and adjusts to keep you in the center of the frame and forever in focus.

Google Palm Reader: Taking the Future of Communication Into Your Own Hands

Despite Google’s ill-fated release of the Google Glasses back in 2014, it seems they are not quite turning their back on the technology just yet. The Palm Reader utilizes a set of smart glasses to project data onto a surface, such as the user’s palm. It can then read and register any information imputed by the wearer as though they were using a touch screen device. 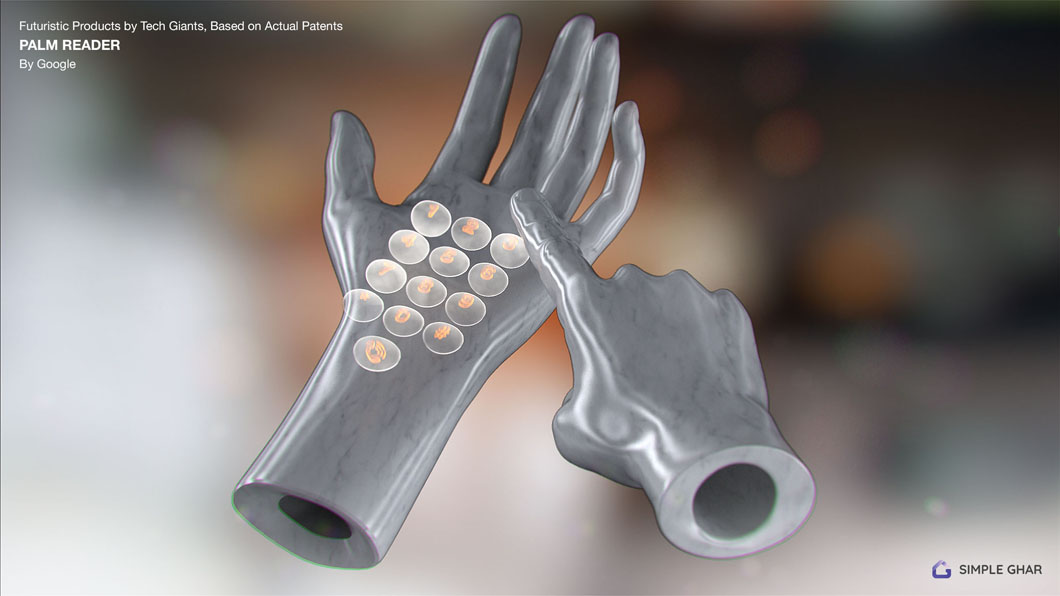 For people on the go, this technology could offer untold benefits, as the projection can beam information and input options directly onto the palm of your hand. From sending a quick message to reserving a table at a restaurant, the Palm Reader gives users a speedy and seamless digital experience without the need for a screen or tangible, handheld device. 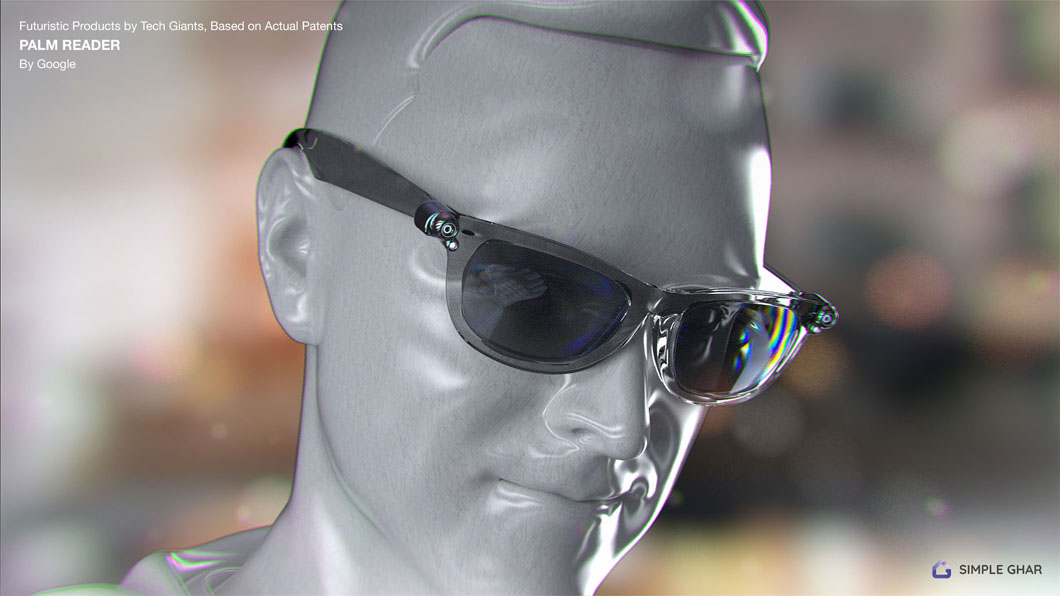 With the projector on one side of the glasses, there will be a camera to record and process information on the other. The Palm Reader will also employ infrared technology to track movement for enhanced accuracy and faster data processing.

Apple iShield: Making Smashed Screens a Thing of the Past

In 2007, Apple released the very first iPhone, with its groundbreaking touchscreen display and sleek design. Since it hit the market, millions of users have experienced smashed, cracked and scratched screens as a result of inevitable drop events. After 15 years of suffering, Apple has devised an ingenious safety system to finally put an end to damaged screens. 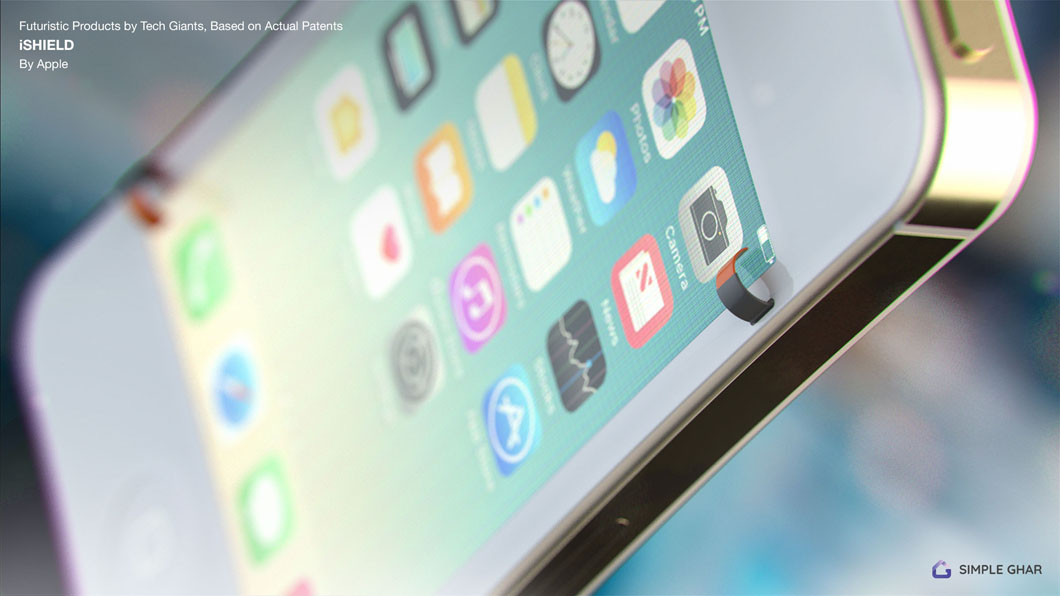 The iShield will come built into all new Apple devices. Consisting of a simple yet highly effective set of retractable screen protecting pins that will cushion the screen on impact to prevent any breakages. Key to this technology is the ability for the device to detect when it is in free-fall, which will then automatically engage the defense system.

Once activated, the pins will be deployed, rotating on their axis in each of the screen’s stress points to act as a buffer between the device and the floor before neatly retracting back into the device once the phone has been secured.

Samsung Smart Sight: See the World Clearer than Ever

While some tech companies are exploring wearable glasses as their next revolutionary smart device, Samsung is going one step further. After all, why wear cumbersome glasses when you could have a discreet, seamless contact lens that will project information directly into the user’s field of vision? 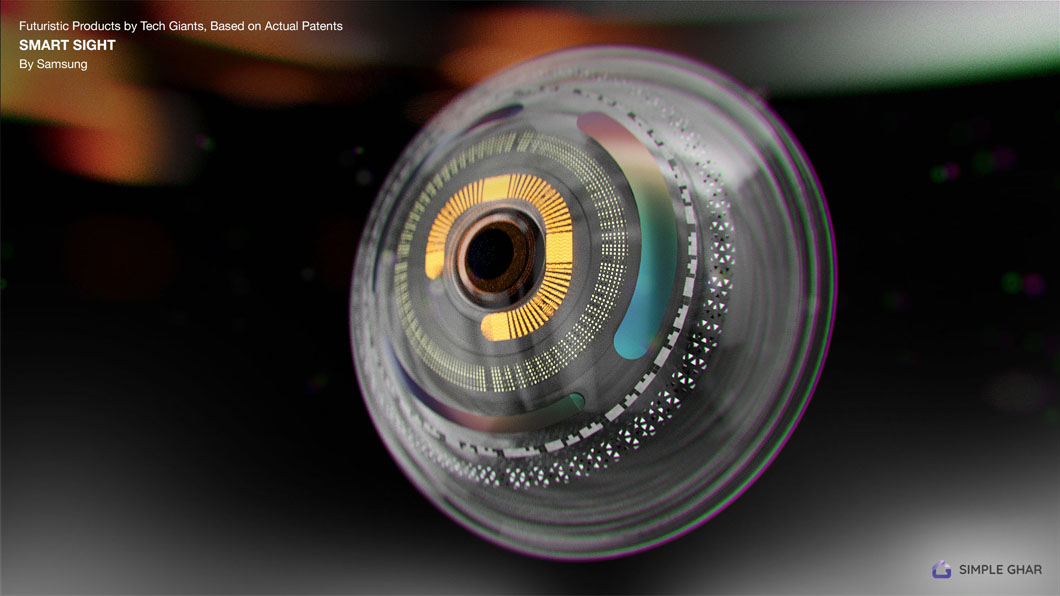 The Smart Sight lens won’t simply be an extension of our cell phone interface either. Instead, this technology will open the door to further augmented and virtual reality opportunities, allowing users to interact with their surroundings, receive real-time data and explore new digital horizons. 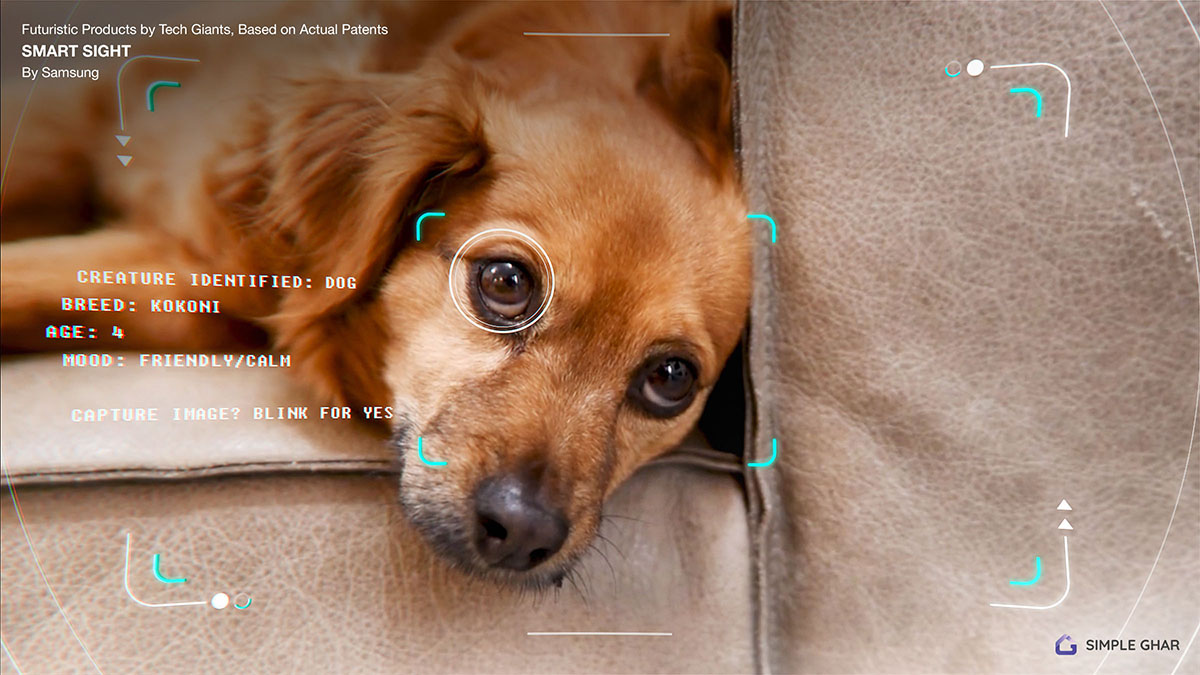 Plus, with the capability to capture images directly from the lens, this product will fulfill many people’s futuristic dreams by enabling the user to never miss a moment, nail the shot and achieve hyper-realistic images as they record and document their lived experiences.

The MonoWheel: Ford’s Fuss-Free Travel, On Four Wheels or One

From the Model T to the Mustang Mach-E, Ford has been at the forefront of automobile technology for over 100 years. This legacy looks set to continue with their latest development, the MonoWheel. Bringing new versatility to the everyday car, this new technology will allow drivers to switch from a four-wheel car to a single, self-propelled unicycle. 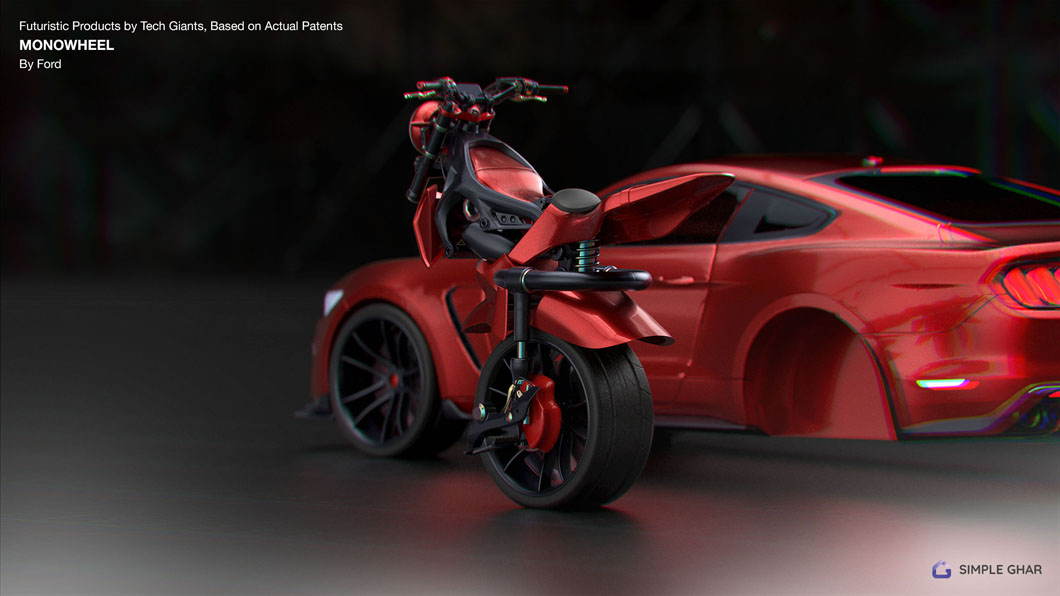 With a state-of-the-art steering hub, users can transform a wheel from their car into the ultimate urban transportation unit. Powerful motors will propel the wheel to allow drivers to glide through traffic without breaking a sweat. The robust nature of the car’s wheel will offer unrivaled stability and durability to adapt to any changes in terrain. 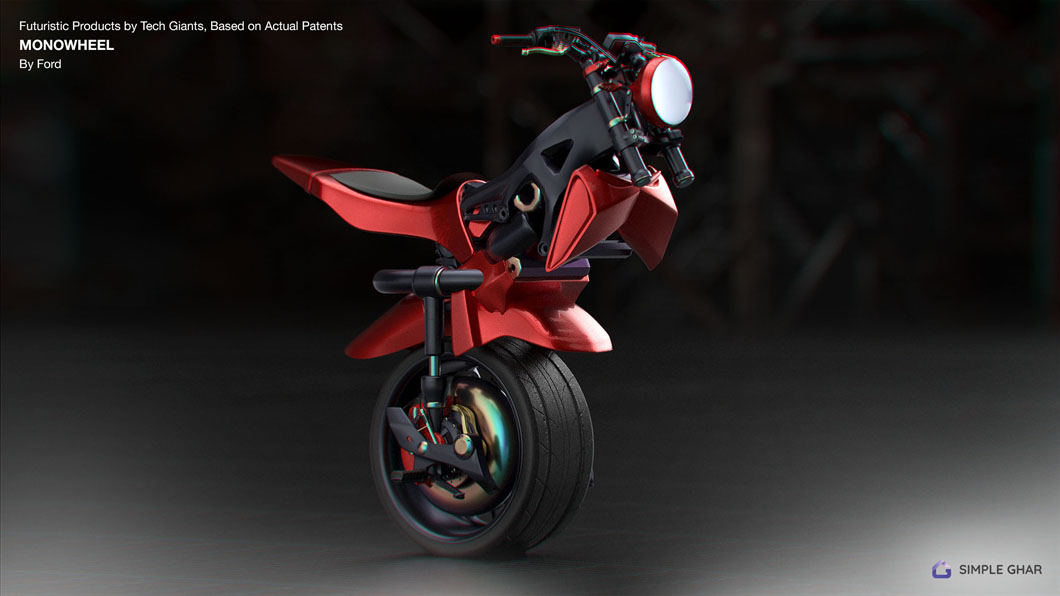 Thanks to the advanced suspension system, removing and refitting the wheel will be super simple. At the touch of a button, the rear of the car will rise from the ground with the wheel disengaging. The motorized hub then effortlessly attaches, allowing the driver to continue their journey on the MonoWheel.

Freedom Suit: Fluglicht’s Mission to Take Us to the Skies

For millennia humans have aspired to soar through the air like birds. From jetpacks to paragliders, various inventions have tried to make this dream a reality, with little real-world success. The Freedom Suit from Fluglicht aims to change this narrative. 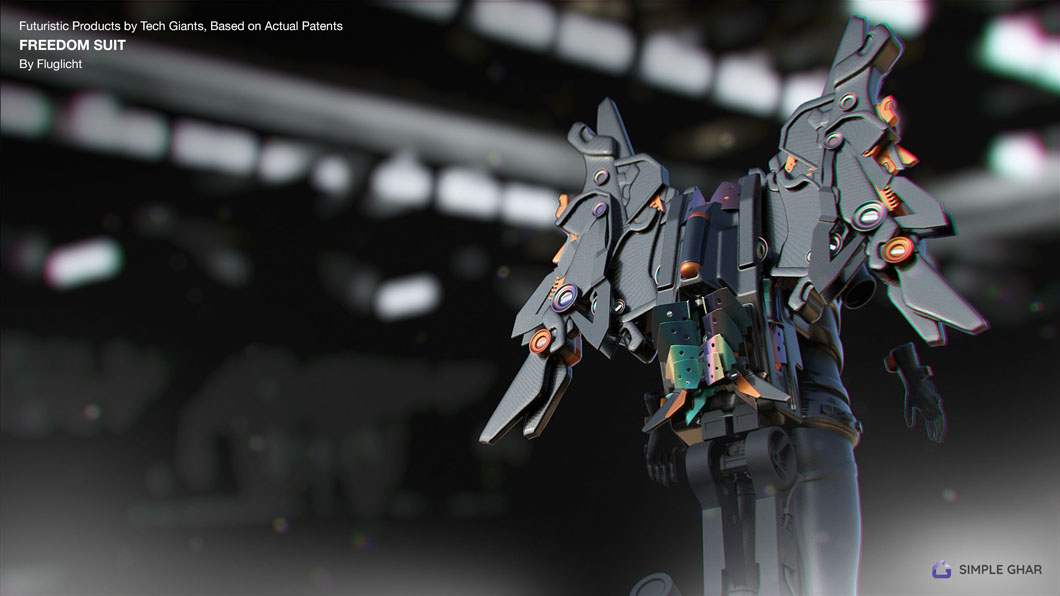 Born out of an innate desire to fly, not for the speed or luxury of travel, but for the thrill and freedom it would provide. This passion is driving the team behind Fluglicht to develop the world’s first wearable exoskeleton that mimics the movement of birds’ wings. 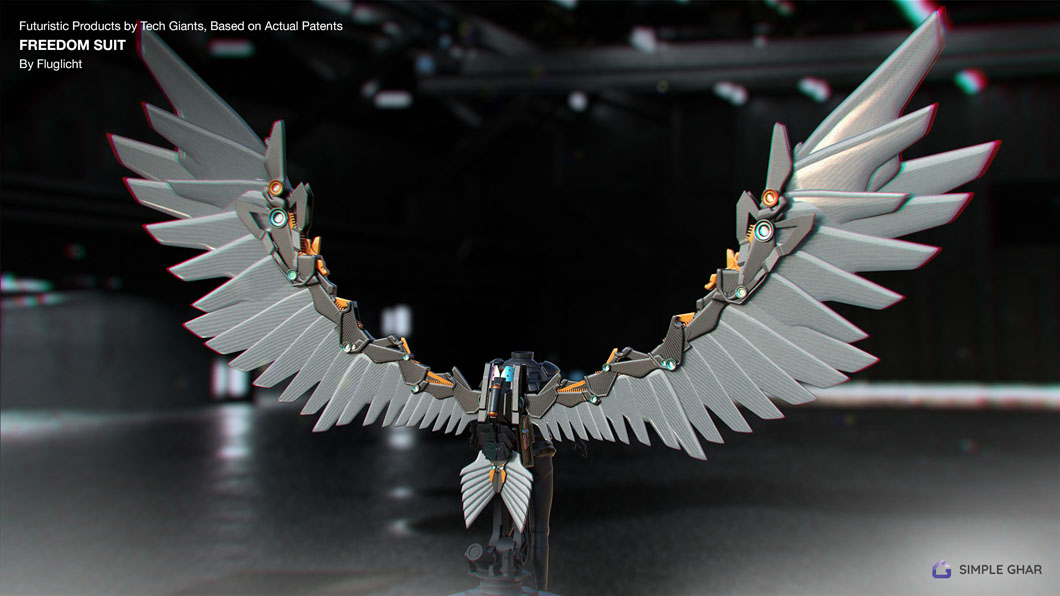 Flight would be generated by the user’s own movement, by completing a flapping motion, along with the assistance of hydraulics built into the wings that will bear the brunt of the user’s body’s weight. Once airborne, the wings would lock into place to enable gliding without effort, allowing the pilot to experience flight like never before.

Apple iScribe Air: Write Anywhere, Anytime, Without the Need of a Surface

There’s no denying that stylus technology has come a long way in the last decade. From its early incarnations that would often lag, drop out or damage between uses to today’s user-friendly editions that produce clear text or illustrations straight to your device. But Apple believes there is still plenty of room for improvement. 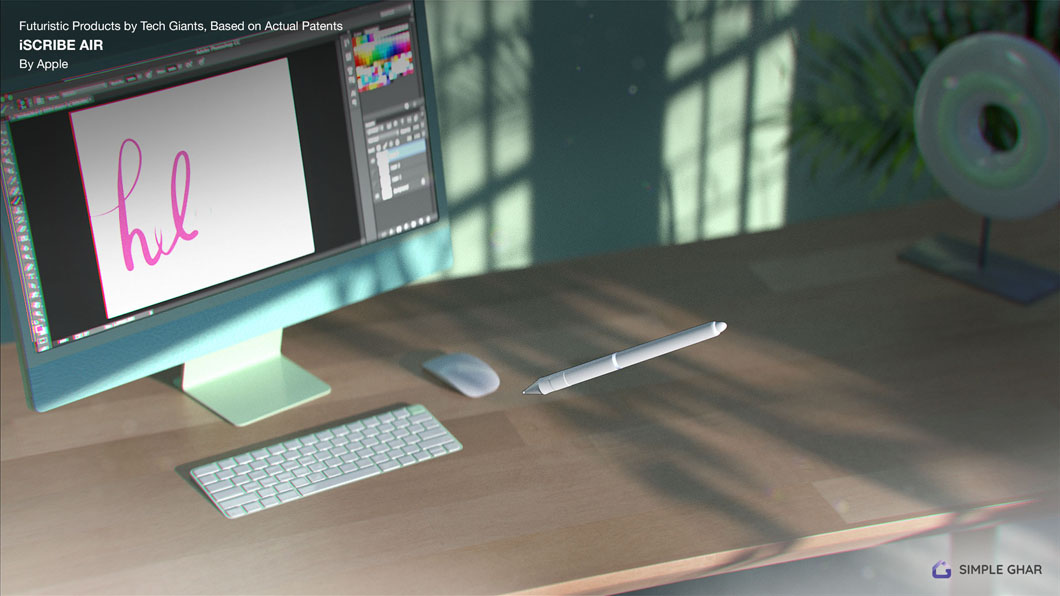 Enter the iScribe Air. The smart stylus that requires no touch-sensitive surface to bring your creations to life. Perfect for writers, designers and artists to develop their craft or even just for everyday use when jotting down a quick list, note or message. 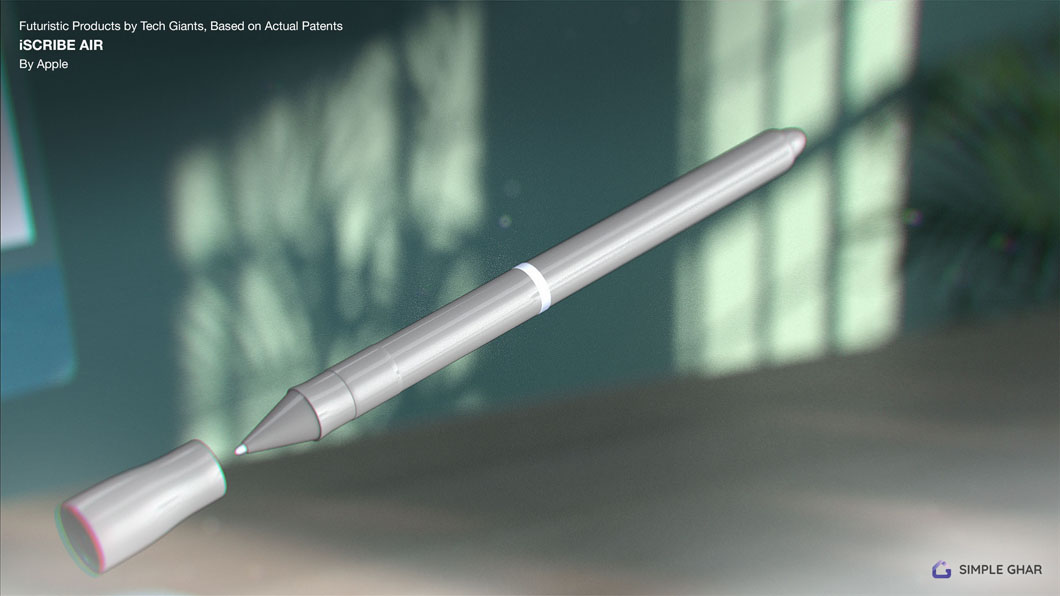 Using ultra-sensitive trackers, the iScribe stylus will relay every letter, movement or brushstroke that is drawn in mid-air directly to your Apple device. The plans suggest multiple means of tracking movement will be utilized, including motion sensors, cameras and even electromagnetic triangulation, providing pin-point accuracy while giving the user the freedom to express themselves without limitations.

A Glimpse into the Future?

In today’s world, it can be a struggle to keep up with all of the latest and greatest technological advancements. In the last 20 years, we’ve seen the introduction of driverless cars and leisure trips into space, not to mention that most people now walk around with a high-tech computer in their pocket.

This level of innovation shows no signs of stopping either, as tech giants are continuously testing ideas and pushing the boundaries of future-proof products. By exploring the products that have been patented by some of the biggest companies in the industry, we can take a peek at the potential tech revolutions that might be just around the corner.

While there’s no telling if these products will come to fruition any time soon (if at all), it offers an intriguing and exciting insight into what technological developments lie ahead.

From the practical inventions, such as the iScribe smart stylus and the Smart Sight contact lens, which seem as though they might not be too far away in our future, to the more fantastical ideas, such as the bird-like Freedom Suit, our future looks bright, thanks to the innovators and tech companies driving us forward.

To bring these futuristic products to life, we first had to delve into the inner workings of the biggest tech companies and see what their research and development teams had in the pipeline.

By using Google’s patent search tool, alongside scouring the web for new product information, leaks and rumored developments, we were able to find a range of exciting new products that offered significant technological advancement.

After selecting the eight most futuristic products, we then tasked our team of designers to bring these ideas to life, creating a series of realistic 3D renders.

The research was conducted in July 2022.