Pressure cookers have become an essential part of everyday cooking. As they don’t have any complicated functionalities, they are quite easy to prepare.

However, in technological aspects, a pressure cooker is a bit complicated. In order ensure user-safety, they have been equipped with different safety features – among them safety valve is a crucial one.

In this article, we will be covering all the aspects of safety valve in a pressure cooker that included its problems and solutions as well.

And lets first start with the main question – what is a safety valve in pressure cooker?

Pressure cookers have to deal with a lot of steam pressure in the cooking process. At some point, it has to release the excess steam to prevent the cooker from blowing up or exploding.

This release happens through the safety valve that holds weight. When the pressure is too high, it lifts the weight and steam escapes through making a buzz sound.

If this safety precaution fails for any reason, then the steam builds up without releasing and can lead to dangerous explosion.

How Exactly Does a Pressure Cooker’s Safety Valve Works?

Usually, a pressure cooker comes with two in-built valves for releasing the pressure inside the appliance.

One of them is a classic whistle with pressure regulating valve and another is pressure regular valve present a little away from the first one. It is fixed onto the cooker lid and made from synthetic rubber like hardened viton or neoprene which helps in maintaining the pressure and good seal.

When the pressure inside the cooker increases, the inner part of safety valve will sense the elevation. And when it exceeds the normal levels, the rubber will start to melt and disc will lift.

This creates an outlet that lets the high-pressure steam escape into the air from the inside of the cooker.

Once the excess pressure is released, the disk goes back into its position. And the safety valve will open only when other means of steam release have failed as a last resort to prevent any explosion. 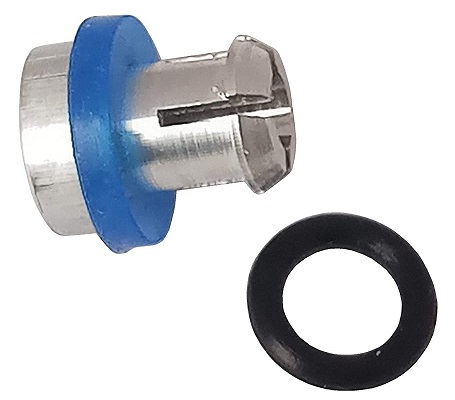 Possible Causes for Steam Coming Out from Safety Valve

Pressure or steam release doesn’t always mean danger. It mostly indicates some dysfunctions that need attention. We have mentioned some of the possibilities below for your reference.

Is it Possible to use the Pressure Cooker When the Safety Valve is Broken?

The answer to this question is actually both no and yes. But we highly recommend ‘NO’. safety valves are present in a pressure cooker for a reason.

If there isn’t a safety valve, then cooking in it can lead to dangerous consequences.

This can be avoided by just replacing the damaged safety valve. You have to remember that health is more important than saving a coupe of bucks.

Can we Repair the Pressure Cooker’s Safety Valve?

If you suspect the pressure cooker is not because of the safety valve, then the first thing is to take the appliance to the nearest service centre. You can use the cooker without the lid on but it is better to avoid using it with the lid until you get it repaired.

Can we Replace the Pressure Cooker’s Safety Valve?

Yes, it is possible to replace safety valve of a pressure cooker. And moreover, it is recommended to replace it if the valve is out of friction or damaged.

Replacing the safety valve can be done in two methods – one includes changing it from inside and another from the outside. Below are the clear instructions for the same.

Once the old and damages safety valve is replaced, you have to screw back the new one in its place.

For some models, you may have to remove the handle for accessing the actual valve. It depends on the model of pressure cooker you have.

Tips to Avoid Steam Coming From a Safety Valve

To maintain the pressure cooker longevity and prevent any disasters, it is important to check the safety valve and gasket on a regular basis. If there is any damage, getting it repaired or replacing is very important. Safety valve in a pressure cooker plays a very significant role.

We believe any questions and doubts about the safety valve has been clarified by the information present in this article. If it hasn’t then, write them to us in the comment section below.