The Evolution of Camera Phones, Visualized

Little shows your age like the look of your baby photos. Square, yellowing Polaroid or soft and saturated Kodachrome; the bleached-out vintage of cheap 1980s flash photography: each of them used the tech of the time, limits and all. The same was true when the camera phone landed – novelty and convenience came first, while clarity and resolution would need to wait for later models.

Sophie Kahn is 25. She was born in 1997, and her delivery room portrait was the first photo to be instantly sent across the internet. But her father, Philippe, didn’t use a camera phone – they didn’t exist. Instead, the tech pioneer spent his wife’s 18-hour labor hooking up a 320 x 240-pixel digital camera to his flip phone to fast-track his idea for what he called Instant Picture Mail. (“It’s always the case that if it weren’t for the last minute, nothing would ever get done,” says the inventor.)

Following his historic photo of young Sophie, Philippe developed his Frankenstein-like invention into a 640 x 480-pixel ‘piggyback’ camera that the earliest of adopters could snap onto their Motorola Accompli. This turned out not to be the way the world would share their selfies. But Kahn did work on what would become the first instant camera phone in the U.S: the Sanyo SCP-5300.

After that, screens got clearer, phones got smarter, and their cameras became the standard for consumer photography – and even a lot of pro work. Today, thousand-dollar phones and burners alike are marketed on their camera resolution. A quarter-century after ‘instant picture mail’ was born, SimpleGhar decided it was time to show how the quality of mobile phone cameras has evolved.

To compare the capabilities of camera phones over the years, SimpleGhar’s experts gathered data on the tech specs of the best-selling devices and those that made a significant leap in image quality. Then, we created mock-up images of the effect each camera phone would have on a consistent set of sample photos. We can now present these as a series of timelines and an interactive comparison tool.

Timeline: From Built-In Selfie Mirror to Periscope Zoom in 20 Years

When the BBC reported the arrival of the Sharp J-SH04 over 20 years ago, readers got a snapshot of how the public thought the world’s first camera phone might (or might not) change the world. The comments section reveals that people imagined two main uses: dog photos and spying (whether on business competitors or to peep through keyholes). Others were less impressed. “Infinite uses for the teenager, not entirely sure what the rest of us would do with one though,” commented ‘Lizz’ in the UK.

With no front-facing lens, the Sharp J-SH04 instead had a mirror next to its rear lens to help you frame your selfie (a word that didn’t yet exist). Pictures resolved at a grainy and washed out 352 x 288 pixels, but you could transmit them directly from your phone – unlike those of the earlier Samsung SCH-V200, which some tout as the first camera phone.

Scroll through our interactive timeline below to see how the photo image quality has improved every year since the J-SH04’s 0.111-megapixel (MP) debut.

People took around 80 billion photos in 2000 but mostly on film and early digital cameras. When camera phones appeared on the U.S. market a couple of years later, critics continued to scoff: “Eventually we’ll get to the point where our pager is mated with the blender. ‘Sorry I missed your page, I was making a smoothie,’” teased one New York Times tech writer.

In 2021, we probably took more like 1.4 trillion pictures, many on camera phones with resolution 400 times greater than the Sharp J-SH04. Sharp continues to develop camera phones for the Asian market, from the weird (mouth-level selfie lens) to the wonderful (world’s first 1-inch camera sensor). But the Japanese brand has failed to capture the international imagination, leaving the key players of Apple and Samsung to dictate the agenda. Meanwhile, other big phone brands partner with the most celebrated camera manufacturers, including Leica, Zeiss, and Hasselblad. Photography is a changed culture.

All Pixels Are Not Equal: Compare the Image Quality of the Most Iconic Camera Phones

Today, the conversation is centered on the merits of the latest Galaxy or iPhone, with distinct talking points arising around a few iconic alternatives and hefty weigh-ins from the likes of Google. But camera phone history has played out on a wide playing field. We’ve recreated the aesthetic of 58 noteworthy camera phones for you to compare using the tool below.

High megapixel counts sell camera phones, but not all pixels are created equal. “It’s really a matter of quality over quantity when it comes to the relationship between smartphone megapixel count and image quality,” says Rob Layton, lecturer in iPhone photography at Bond University. “Sensor arrays that are larger and deeper will produce better quality images than sensors having more pixels that are smaller and not capable of absorbing as much light.”

Whether you hanker for Samsung’s 108-megapixel Galaxy S22 Ultra 5G or are considering the ‘mere’ 12MP of the iPhone 13’s Smart HDR 4 neural engine, it’s essential to look beyond the numbers and figure out which gear and software will be the best for your needs: from the look you like to the conditions in which you’ll shoot.

15 Years of the Apple iPhone Camera

The Apple iPhone changed the phone landscape when it landed in 2007. But its camera was very simple, with no flash, zoom, or video; the front-facing camera wouldn’t appear until the iPhone 4. And, like so many early phone cameras, the iPhone was terrible in low light. However, the first iPhone’s relatively high-res screen reproduced photos well and ushered the public into the idea of a ‘device for everything.’

By the time of the iPhone 5, folks were using it to make feature films. And by the iPhone 6, the camera had grown to 12 megapixels with 4k video. The 11 introduced an ultrawide lens and night mode, while the 12 added LiDAR sensors for rapid focus and AR/VR purposes. Apple has refused to perpetuate the megapixel war, leveling out at 12MP for now. Instead, the brand is devoting attention to the underlying software to deliver a stronger image.

Samsung Camera Phones: From Photos You Can’t See to “Wider Than You Can See”

Samsung has been in the camera phone business for as long as cameras have been in phones. In fact, the brand has a claim to the first camera phone, in the shape of the 0.35-megapixel SCH-V200. The lens could rotate from the front to the rear of the flip phone to facilitate selfies without the need for a steampunk mirror attachment. However, since users could only access their photos by connecting the phone to a computer, the Samsung SCH-V200 is generally discredited as the first camera phone. (Phone nerds, be sure to check this thorough video tour of the original OS.)

Within a decade, Samsung released the Galaxy S complete with 5MP, HD-video rear camera whose Panorama Shot mode delivered photos wider than the camera’s own screen, while the front camera could be used for video calls. Today’s Samsungs utilize artificial intelligence to help users “capture moments of their lives in more meaningful ways,” and feature a periscope lens that offers 10x optical and 100x digital zooms. The S20 Ultra ushered Samsung into the exclusive 108-megapixel club alongside Xiaomi – although the value of a pixel rate this big depends very much on what the software (and the user) does with it.

Nokia: A History of Forward-Thinking

How many gigabytes of photos do you have on your phone? The first Nokia camera phone illustrates how far we’ve come: users had just 3.4 megabytes to play with (of a 4MB total memory). Resolution on the Nokia 7650 was a mere 640 x 480 pixels, but it still felt like science fiction after the brand’s previous efforts at a clip-on camera phone – not least because Nokia designed communications props for that year’s Minority Report movie and tied it into their ad campaign (among other cinematic visions).

Indeed, Nokia has always pushed sci-fi buttons with its designs. The N90 flip phone twisted, when open, into a camcorder shape to bring out your inner filmmaker or – flipped the other way – facilitate cool-as-ice selfies. With the N90, Nokia also drew attention to the importance of lens quality plays in capturing a decent photo. It featured a Zeiss.

Nokia pioneered now-standard features such as alternative aspect ratios and pixel binning along the way, and its Lumia series remains a peak in camera phone history. While Apple and Samsung leave us eager for the next new thing, Nokia holds a nostalgic place in consumers’ hearts as a brand that saw camera phones in a different way.

Google has barely half a decade in the camera phone trade but has approached it with unrivaled firepower. Thanks to Android, the Nexus program, and Google’s huge engineering resources, the camera software in the first Pixel made it an immediate contender for best in class. In 2018, the Pixel 3 series added Night Sight, banishing the grainy or blurred images that have plagued low-light photographers throughout the camera phone age. 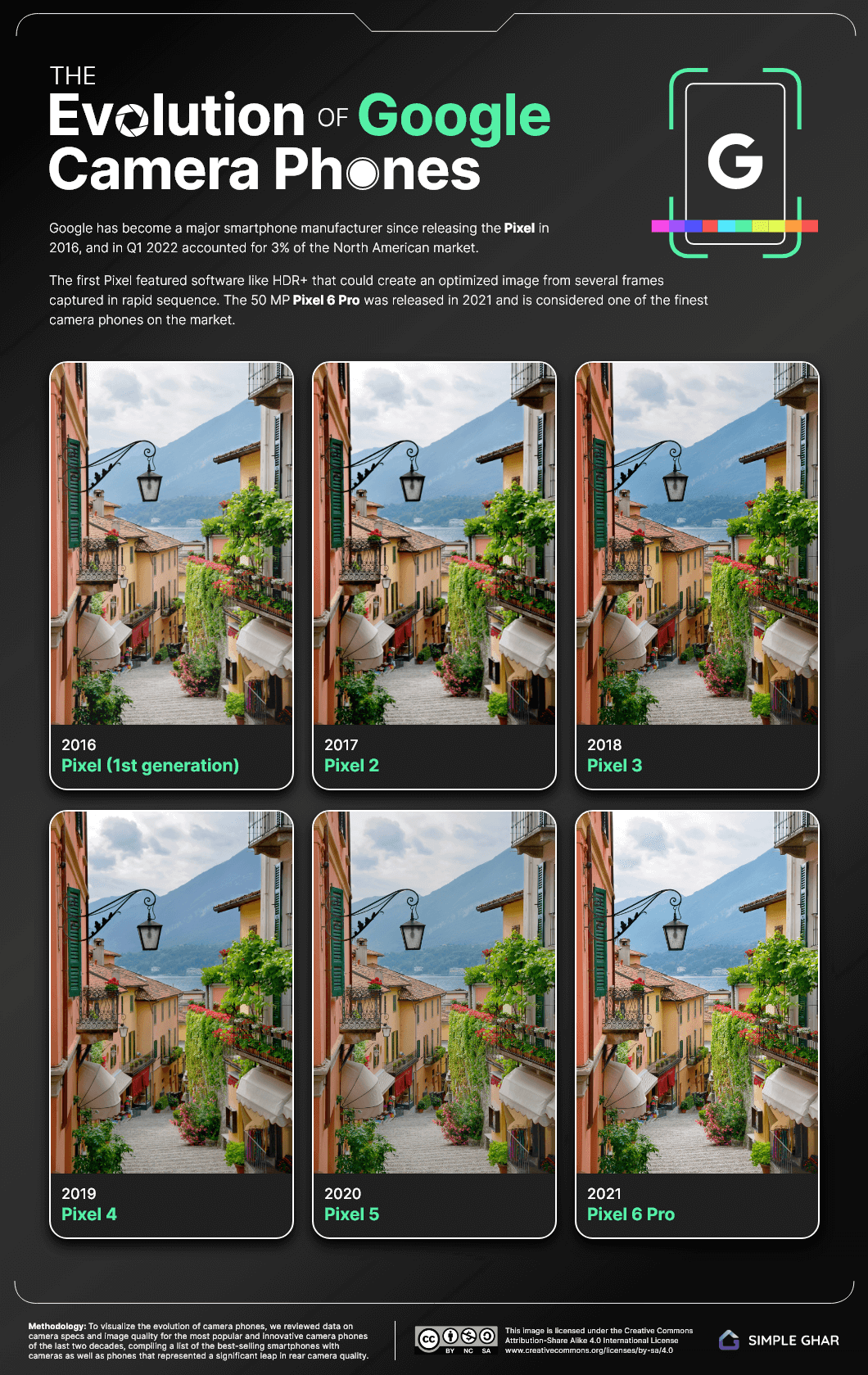 Since then, the Pixel has struggled to achieve the heights of its big-name rivals. Plagued by odd lens notches and poor battery life, it took the arrival of the Pixel 6 (with 50MP lens and lower-res ultrawide and telephoto options) to put the Google phone back in contention. But with keen intentions to be the eyes and ears of the world, the Pixel – or its successors – are likely to show us camera phones as we’ve never imagined them.

Focus on the Future

Of course, Google spent a lot of the energy it might have put into phones instead of developing its map photography and short-lived (for now) Google Glass. The brand’s mixed entrance into the camera phone business illustrates how manufacturers must balance the desires of the consumers with their own hunger for user data and imagery.

The future of phone photography might be as much to do with light and magic as it is with data and code. After all, once they’ve fitted infinite pixels into your ultra-high-resolution camera phone, where might they go next? On the one hand, the camera phone of the future may fold up neatly into your pocket, opening out into a window on an augmented world – adding real-time virtual/metaversal action to your snaps on multiple layers of reality. On the other hand, we are likely to see an ever-closer embrace between software-driven processing and high-end optics developed by legacy camera brands such as Hasselblad and Leica.

Will you be ready to capture that moment?

To visualize the evolution of camera phones, we reviewed data on camera specs and image quality for the most popular and innovative camera phones of the last two decades.

We compiled a list of the best-selling smartphones with cameras as well as phones that represented a significant leap in rear camera quality. We removed any phones where we could not find camera samples as references.