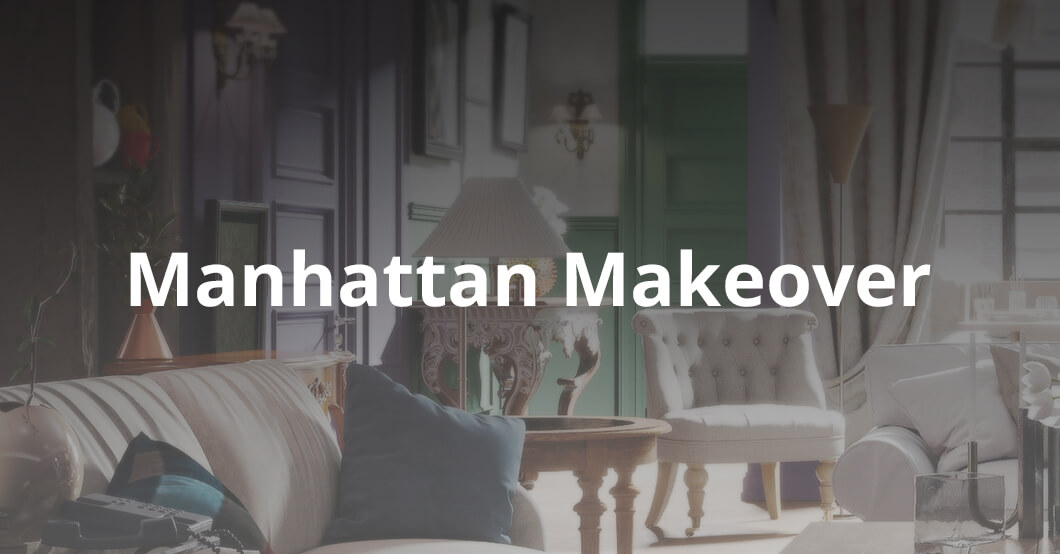 Viewers from more than 100 countries visited Monica Geller’s living room each week at the height of Friends. The show was a true international phenomenon. But what might a non-American version of Friends look like?

Sure, there was a Hindi show called Hello Friends that featured six urban buddies hanging out at, um, ‘Uncle Sam’s Café.’ But Monica/Sanjana’s apartment looked even less Indian than the American version, and the famous violet walls looked blue in some places and radioactive in others.

Then, there are foreign-language re-dubs. But the jokes are more or less the same, and the décor is identical to the original.

SimpleGhar wants to see a bit more variety. We wondered what the world’s most recognizable living room might look like restyled with interior design trends from India, France, Brazil and elsewhere. So we did our research and created digital renders of Monica’s apartment in six international design styles.

India loved Friends. At one point, the sitcom was the third-most-popular anglophone show in the country, and at least five Friends-themed cafés have capitalized on the hit show. But the Indian remake of Friends was more interested in copy-pasting the American aesthetic than creating a true ‘Indian Friends.’

So here is Friends with a different flavor. Our Indian-style Monica living room translates everything that’s gloriously overblown in the original show into an equally bombastic Indian look. Latticed jali window frames and a sandook chest for the all-important coffee table set the tone: wood is good. Dark, handcrafted furniture contrasts with bright, sensual textiles for a lounge that feels special without sacrificing comfort.

Pro tip: Soften an austere living space by adding low-slung sitting places such as cushions, footstools, and a diwan couch.

“Che ble blah. Me la pee! Oublah! Poo!” Joey’s attempts to add a French accent to Friends fell flat on their visage. So, this is how Monica’s apartment might look if her interiors were as chic as they were squeaky clean.

What Monica did get right was her blend of modern and vintage. Nothing adds the ‘je ne sais quoi’ of French style like combining tasteful but unexpected elements with flair. However, it’s adieu to Monica’s purple paintwork, since the French keep their walls off-white to maximize natural daylight. Plain-colored walls mean Monica can express her full inner romantic with richly colored, textured upholstery in velvet and brocade.

Pro tip: Be bold like the French with a statement light fixture such as a chandelier to instantly level up your room.

If Monica’s Japanese-style apartment seems a little quiet, look at the rug. We’ve redesigned the lounge from the floor up, starting with a traditional tatami mat. Tatami simply means ‘folding rug,’ and the mat is usually made from rice straw and intended for sitting. In Japan today, it is saved for more traditional household rooms but can add calm to any room, especially when paired with sculpted greenery as below.

We’ve taken some poetic license and swapped Monica’s balcony for a yard. Japanese architects keep the garden or other natural areas visible from the living room. But Monica might just as easily have kept more leafy plants on her balcony or inside the window to capitalize on the play of natural light.

Pro tip: Blur the transition between indoors and outdoors by using natural, untreated materials such as wood, bamboo, and stone.

Matt LeBlanc learned a curious lesson about the popularity of Friends in North Africa: “I was in the Atlas Mountains in Morocco, shooting a thing for Top Gear,” says the Joey actor. “I mean, we were far away from civilization. And these people were wearing robes, and they live in caves and stuff. They called me Joey and said, ‘How you doin’?’ in a really butchered accent.”

Friends may be big in Morocco, but Morocco is also big in New York. The bohemian flavor, rich fabrics, and intricate craft in Moroccan-style interiors create a sense of luxury, but the eclectic use of texture allows you to do so on a budget – mix-matching odd second-hand pieces from here and there instead of splashing out on a brand-new suite.

Pro tip: Keep walls plain but go wild with soft furnishings such as rugs, poufs, and cushions to create a richly colorful room without being overbearing.

If Monica remodeled her apartment between then and now, she probably would have gone Scandi. Scandinavians are born architects. They value simplicity, minimalism, functionality, and cleanliness. The palette is neutral: white, black, tan, with metallic or pastel colors if you’re feeling risqué.

Thankfully, Scandi designers also place a high value on nature, using wood, houseplants, knitted throws, and faux fur to humanize a space. Scandinavia is also famous for IKEA, so Monica can easily find affordable furniture and fittings that test the boundaries between ‘utilitarian’ and avant-garde design.

Pro tip: Scandi style overlaps with mid-century modern design, so a sofa with a 1950s or ‘60s shape makes a great anchor point to decorate around.

How about Friends: the Telenovela? A Brazilian Friends would certainly be a lot warmer. You can see below how we have extended Monica’s apartment into the yard via a sunroom to encourage more outdoor banter. Indoor palms and floor-to-ceiling wood paneling further warm the room.

This particular style is known as ‘mid-century Brazilian,’ and it adds a touch of fun and rhythm to its European equivalent. Keeping wall coverings plain and the furniture profile low opens up space for wild, abstract hanging art. The furniture, too, has a pop-art sensibility, with curvy neotenic shapes adding playful sophistication to a rugged backdrop.

Pro tip: Green walls take the edge off a naturally bright room without dulling it altogether – green is both timeless and super-trendy right now.

Friends was a neo-colonial stealth agent, sneaking a New York lifestyle, a Gen X way of talking, and a range of American interior design styles under the radar to audiences around the world. But, aside from Hello Friends and the occasional unofficial clone, Friends has never had a proper reboot – and is never likely to, either.

But as our international-design-style Friends apartment shows, there’s really no end to the possibilities once you bring new cultures into the mix. Which nationality would you like to remake Friends – and renovate the Friends set in a local style?