What Is A Surge Protector? 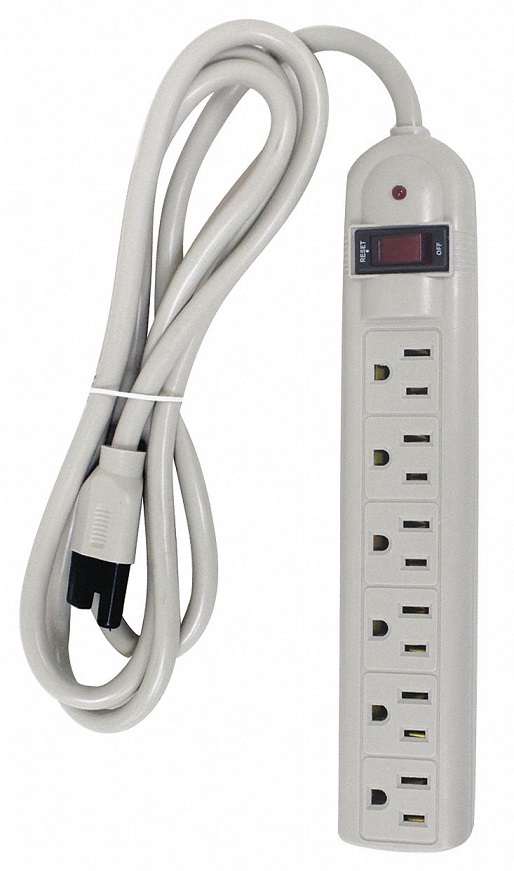 A surge protector – a must-have device to protect the electric appliances from sudden voltage spikes.

If you want more information on surge protectors before investing in it, then read this article thoroughly.

Here is a quick guide that explains everything you need to know about surge protectors. In this article, we shall discuss what a surge protector does, how it works, and how it protects your appliances.

Continue reading below if you want to have all your questions answered.

What is a Surge Protector?

A surge protector is that appliance specially known to offer protection against voltage spikes, thereby avoiding any mishap.

It basically has two main functions. The first one is to pass the electric current against the multiple outlets through a single power outlet. The second and most important function of a surge protector is to protect your equipment against power surges and voltage spikes.

What Do Surge Protectors Do?

Surge protectors, also known as spike suppressors, divert the power surge from entering the sensitive circuits of the equipment or the number of devices plugged into the surge protector. It prevents the damage by redirecting the voltage spikes to the ground, thereby safeguarding your appliances.

Joule rating is the determining factor of a surge protector.

The higher the joule rating the surge protector has, the greater protection it provides.

Most models come with an LED light indicator that shows whether the surge protector is effective or not. When you see the light turned on, it is an indication that the protector is functioning properly in protecting your electronic appliances and devices.

Do You Know How A Surge Protector Works?

The working mechanism of a surge protector is very simple. It takes the current from the main outlet and then allows it to pass through the multiple devices plugged into the protector. It safeguards the appliances from sudden voltage spikes and further damage.

The metal oxide varistor or MOV, present in the surge protector plays a crucial role in safely diverting any excess voltage to the ground level. This further ensures that all the devices receive and maintain a uniform power level without any discrepancy.

While surge protectors protect your electronic devices from surges, they do not work always. There are various reasons for this, and the primary one is that they do not last forever. In order to know if your MOV is in good working condition or worn out, choose one that comes with indicator light. Even after the surge protector wears off, many will still work. However, they do not provide surge protection.

How do you guard your house against lightening? Although it is very uncommon, your surge protector might not have the capability to handle the nearby lightning strike. If you want to protect your house from this, we advise you to install a whole-house surge protector at your load center (electrical panel).

You need to have a proper grounding and wiring if you want the excess voltage to escape. If there is no grounded outlet, your surge protector will not work.

1. What happens if I don’t use a surge protector?

Many have this question in their minds. Is it mandatory to use a surge protector, and what happens if I do not use one? While your electrical devices may seem to be working fine, they decrease the life span of the appliances. In addition to that, they do not get protection against random power spikes. In case of a sudden surge, there are chances of wear and tear to the devices and may eventually get damaged without a protector.

2. Is a surge protector the same thing as a power strip?

Many people often confuse a surge protector with a power strip. This is because they look similar, and it is often difficult to tell the difference. However, both are a little different, and a surge protector is more safer than a power strip. It has extra outlet space on it, becoming more efficient than its alternative. Moreover, it has the joules rating (measurement of energy) mentioned on the packaging. A power strip does not have this. When you are making a purchase, make sure you check for the rating that tells the amount of protection it can give.

3. What Products Should You Use With Surge Protectors?

When using surge protectors, always plug in the expensive electrical devices with microprocessors like televisions, desktop computers, laptops, charging phones, etc. If you want to ensure they do not get damaged when there is a high voltage, plug them in.
Other items like the light bulb do not need a surge protector. Instead, you can use it for high-end and high-voltage electronic equipment that needs protection from a sudden electrical power surge.
We recommend plugging the AC units and refrigerators directly into the wall power outlet than a surge protector.

4. Is it Okay if I Plug My Surge Protector into an Extension Cord?

It is technically okay to plug in your surge protector into an extension cord, provided it can handle the same amount of energy as the surge protector or even more. However, OSHA and NEC are strictly against this because it is a fire hazard. So, avoid doing it.

5. How Durable Surge Protectors Are? When Should I Replace Them and How Will I Know?

The life span of a good surge protector comes to around three to five years. However, there is a thumb rule to replace it after every two years. Most of us are unaware that our devices might be at risk. While some protectors give some sort of warning or shut down immediately in case of a drop in the safety level, most of them do not. Hence, replace them after two years.

A power surge is nothing but a sudden increase in the voltage, which exceeds the standard level of 240 volts. It causes an abnormal spike in voltage that lasts only for a shorter period. This is harmful to electrical devices and appliances at home and can damage them. The contributing causes are high-powered devices, faulty wiring, lightning strike, or even a problem with the equipment of your utility company.
You may not realize it until the electronic devices at your home stop working suddenly. Your home may experience hundreds of electrical surges every year, sometimes without any damage.
Just like in the bulb filament, the power surge heats wires and components in your electronics and causes them to burn out. Even if the surge does not break your device, it can put additional stress on the internal components of the appliance and eventually cause it to fail.

7. What Usually Causes a Surge or Spike?

The primary causes that trigger a surge or a spike are faulty wirings, turning on or off of the high-powered devices, and lightning strikes.
When there is faulty wiring that is not capable to withstand high voltage power it will cause an electrical power surge.
Switching on or off your high-powered electrical devices like refrigerators or AC units can result in a surge. We all know that the compressors and motors of these devices require more energy to turn on or off. When you operate them, it creates a sudden power demand, further subjecting to power fluctuation. The impact will be immediate, in case of zero protection, or
sometimes, the damage may even occur gradually over time.
A lightning strike can cause a severe voltage surge, leading to the electrical appliances burn out like the TVs, computers, etc.

8. What is the Difference Between a Surge and a Spike?

If there is a voltage surge for about three nanoseconds or more, you call it a surge. If it for about one or two nanoseconds, you call it a spike. One nanosecond is equal to one billionth of a second. Although this might sound trivial to you, the substantial damage that can happen in this time frame is beyond what you can imagine.

9. Is there any Disparity Between surge protector and a Power Strip?

Definitely yes, there are multiple differences between the two of them. The strip provides you with additional sockets to plugin different electrical appliances. However, it is not a solution to your electrical issues like an overflow of electricity or fluctuations.
On the other hand side, a surge protector keeps your devices safe and secured by stabilizing the power flow of current.

10. What makes a power surge different from a power Spike?

In simple terms, both of them, a surge or a spike is extremely harmful to your electrical appliances. They harm in different ways but the harm is equal. A power spike is a short amount of pulse from the power line, which occurs for some milliseconds but damages your devices.
Whereas a power surge is an incident, where the electricity flows with an extremely high amount of voltage that harms your devices.

11. What is the actual life span of a surge protector and when are we supposed to get it replaced?

A surge protector doesn’t last long. The maximum life of a good quality surge protector is up to five years. But also keep in mind that if your residence or commercial space is prone to power breakouts, fluctuations, then it may last for two years.
It’s good to get your surge protectors replaced after three years but as mentioned if your space faces breakouts usually, then replace them in two years.

12. Is it okay to plugin a Surge Protector in an Extension Cord?

Firstly you need to make sure that if you’re plugging in a surge protector in an extension cord, then the extension wire needs to be long enough and has the capacity to bear the power flow. If not, this might result in a blaze.

13. How can I choose a good surge protector?

To conclude, a surge protector plays a significant role in extending the life of your electric devices. In addition, it protects them from the power surge that will cause severe damage to the appliances.

Surge protection is a wise investment that you can make on your electronics and appliances, and your safety, too. Now that you have a full understanding of a surge protector, be a person of wisdom and protect your home from the sudden voltage spikes and surges.

Write to us in the comments section below if you find this article insightful. If you need more information on surge protectors, do let us know. We would answer all your questions and help you with all that you need.

Also, do not hesitate to add your inputs to this write-up. Let us know if we missed any points and post them in the comments section. We would love to hear and learn from you.
Stay grounded and stay safe!!!