Unwinding the Technology Between the BLDC and Regular Fans

BLDC is the latest technological advanced in the ceiling fans section. This technology claims to reduce power consumption by 50%.

In addition to that, these BLCD ceiling fans can run almost twice the duration compared to normal fans on an inverter.

But is it worthy enough to invest in the BLCD fans? Are these fans really better compared to regular fans?

To get the answer for these questions, we have purchased (both normal and BLDC fans) and real-time tested them for over couple of months. Based on this, we have curated a case study in this article comparing normal fans and BLDC fans.

Read through the information to understand which fan is the best for you.

How We Selected the Ceiling Fans?

We purchased top selling ceiling fan models based on the great reviews and top ratings. The two models we selected are

Disclaimer – The products we chose for testing are shortlisted on the basis of customer reviews. None of them are sponsored. We are not promoting or demoting any brand. All the reviews and information mentioned here are purely from our real time testing.

Before getting into the compare test, lets have a look the difference in the factors of both fans.

Next, we looked at the weights of both the ceiling fans. They are almost equal weighing around 4 Kg.

Coming to the build quality, both the fans have good construction quality.

When it comes to speed control, a regular fan can be controlled using regulator usually present in the switch panel. But with the new BLDC fans, you will get a remote control using which you can control the speed and also change different functions like timer and sleep option. These features are quite common in most of the BLDC fans.

Though the BLDC fans upfront costs are higher, when you consider the maintenance or power consumption charges over certain time duration, it actually saves you a lot of money.

To help you understand we are going to perform a simple calculation – where we will test the costs of both (regular and BLDC) fans over 1 year and 5-year time duration. This comparison helps you understand which fan will be cheaper in long term usage. 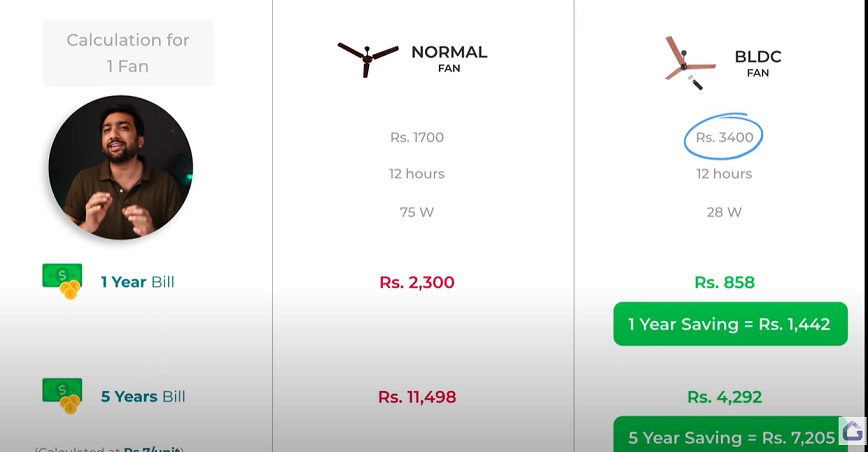 First, we have calculated average power consumption of both fans over 12 hours duration. And calculated the results for 1 year and 5 years.

The common per unit price here is considered as Rs. 7.

So, after the calculation, you can see that the power consumption costs of a normal fan for a year cost around Rs. 2,300.

Thus, the total savings on power bills for 5-year duration is more than Rs. 7000.

Through this calculation, we conclude that the initial higher cost you pay for purchasing BLDC fan will almost be recovered within a span of just 1 year.

To determine which ceiling fan model is better, we have performed some real time tests in our workshop. We have provided the process we followed and results below for your reference.

In this test, we have set both the fans on high-speed range of five and measured the delivery using a digital anemometer (air speed checking device). This device measures speed in CMM (cubic meter per minute).

We are going to check the air delivery at three different points of the room that is – the centre, just beside the centre and at the corner of the room so that we can know which fan provides maximum air delivery.

As you can see in the results, both the ceiling fans have performed quite similar at the speed range of 5 at all three points in the room. 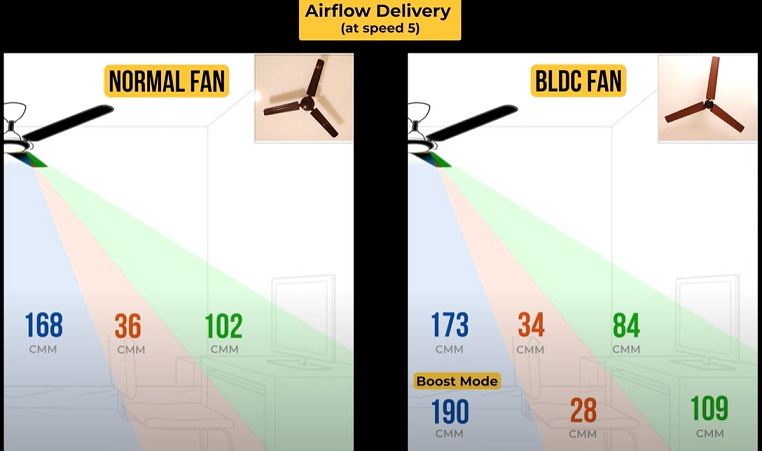 However, when we used the boost feature in the BLDC fans, the air delivery was even better at the speed setting of 5.

In this test, we have set both of the fans at the speed of 5 and checked the power consumed by them. 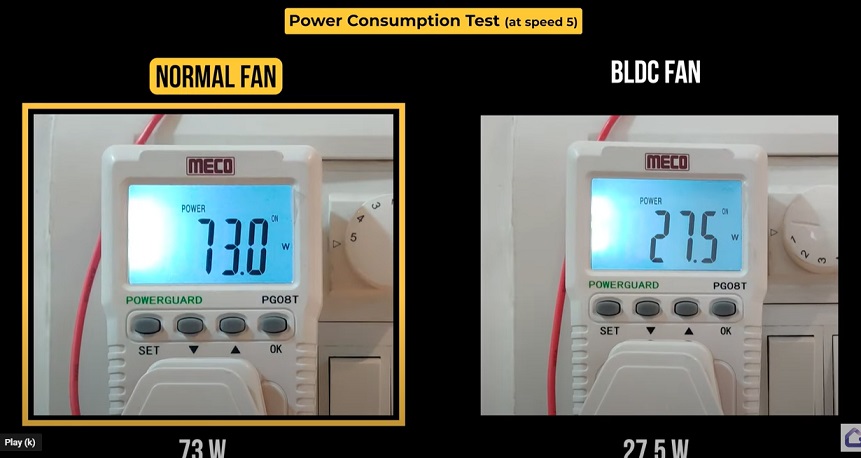 We will be checking the noise generated by both fans at the speed 5 using this noise checking device. 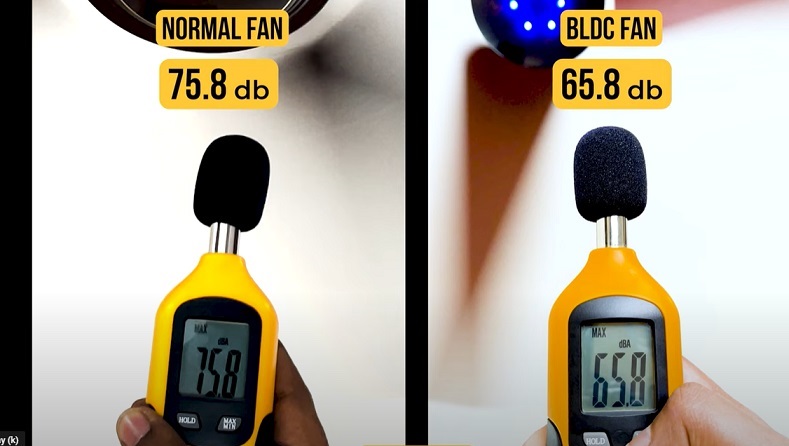 After careful consideration and real time tests, we are going to provide the final comparison of the results below. This helps us determine which one is the best among them. 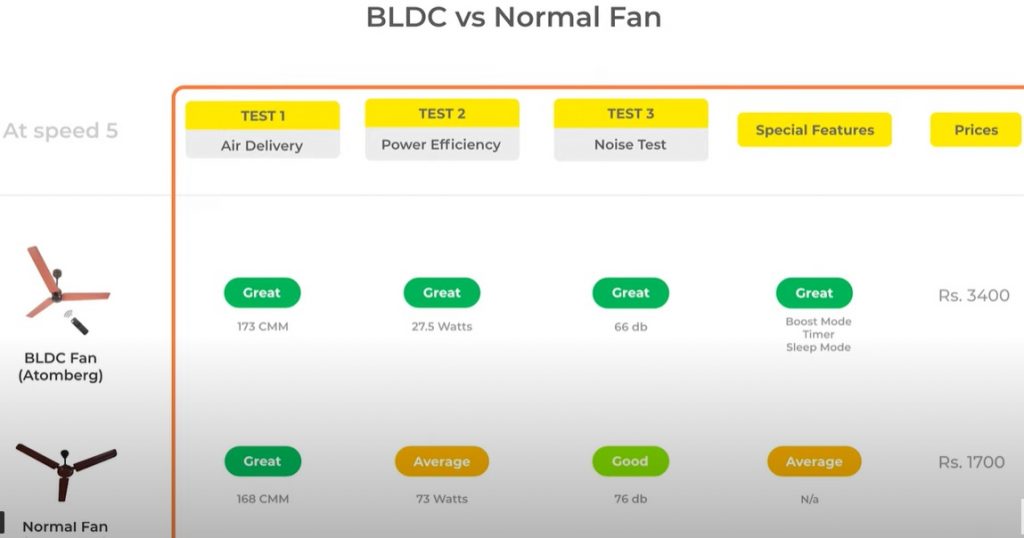 As you can see, although the air delivery of both the fans is quite similar but in terms of power consumption, noise generation and special features category, BLDC fan was much better.

When compare the pricing here, BLDC ceiling fan is slightly on the higher price range compared to normal fans.

But if you calculate the cost in terms of long-term maintenance, you save much higher returns with BLDC fan compared to the regular fan.

Few Words to Wrap Up…

Previously, LED bulbs have taken the market into a new direction of energy efficiency. Because compared to older bulb versions, they consumed less power and generated less heat without compromising on the brightness.

Similarly, there is a new energy-efficient technology in ceiling fan vertical. This new technology is referred as BLDC.

These fans are specially designed and developed to be energy efficient. In this article we have explored whether the claims of them being energy-efficient are true are not. For this, we have purchased the ceiling fans of both variants and tested them in our research lab.

We hope the information provided in this article has provided adequate clarification. If you still have any doubts, write to us in the comment section below.