Power banks are the best travel companions, whether you are having a long day or on a vacation.

They are available in different capacities but power banks with 20000 mAh is the most choice as it can charge a smart phone almost 4 to 5 times.

These portable devices are also helpful to charge different gadgets like tablets, portable speakers, and others.

There are multitude of power bank models present in the market. Choosing among them is not an easy feat.

An ideal power bank has two key aspects that include – how can it charge a device and how soon it can get charged.

Based on the same points, we have performed real-time testing on the popular power banks models.

These products are carefully selected based on the reviews and rating on Amazon. None of them are sponsored by any brand. The reviews provided here in this article are based on our real-time testing. We are not promoting or degrading any product or brand.

When it comes to the design, the MI and REDMI models are around 15 centimetres in height. And the URBN and AMBRANE have around 13.5 to 14 cm height. The width of the all the power banks is around 2.5 centimetres.

Now we shall compare the weight details. Both Mi and Redmi weigh around 437 grams. And the URBN and Ambrane power banks weigh around 408 grams.

Along with these, you will also get Micro USB ports in Mi, Redmi and URBN which can be used for power input as well. With all the power banks, you will get USB-A ports for power output.

If we talk about the charging speed of these formats, you will get around 18 to 20 watts for power input and power output with all the power banks.

Below, we are going to provide the detail process of how we tested and the results observed through them.

For performing this test, we have taken these four Android phones of similar brand and model (One Plus NORD). These phones are completely discharged to 0%.

And the power banks are charged to 50%. And all the battery capacity of these brand is around 4500mAh. For all the phones, they are set at highest brightness and set to airplane mode.

After 5 minutes of charging, you can see that all the power banks have been performing similar and charged the phones almost around 4% to 5%. 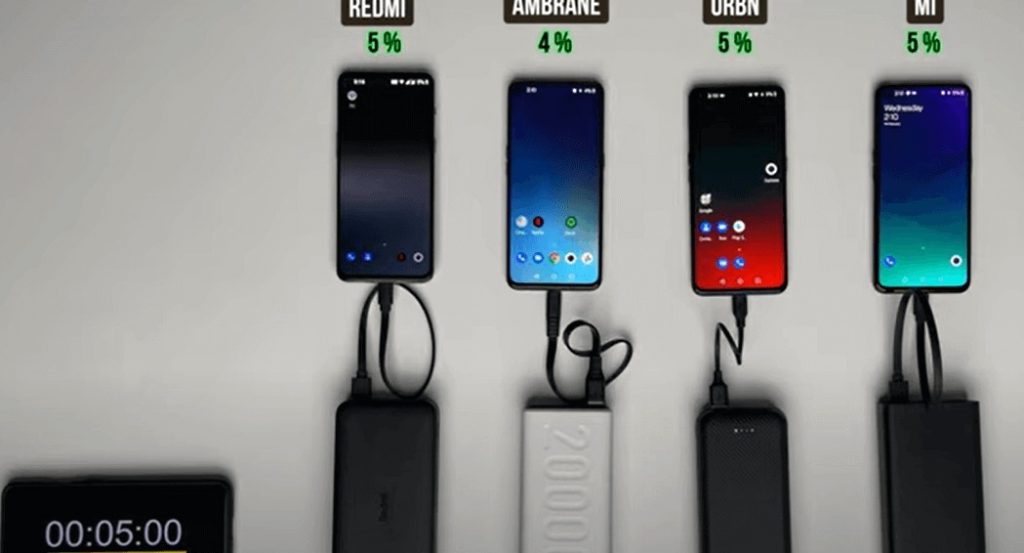 Now, let’s continue the test for sometime to know which performs the best.

Even after 15 minutes, you can see all the power banks are performing quite similar and charged the phones around 16% to 18%. This is actually very good speed rate. 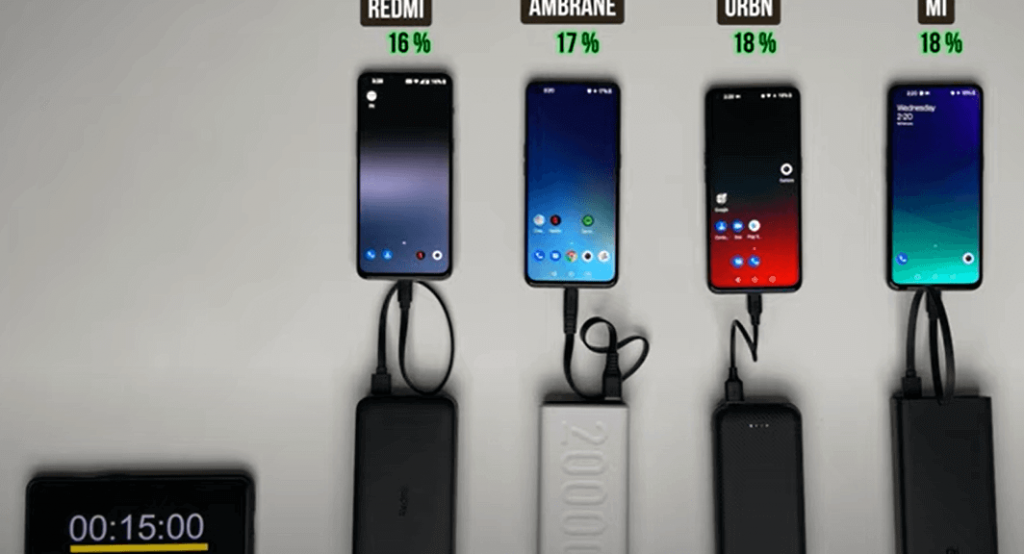 Now, we are going to continue the test till the phones get charged for 10% and see which one performed good. 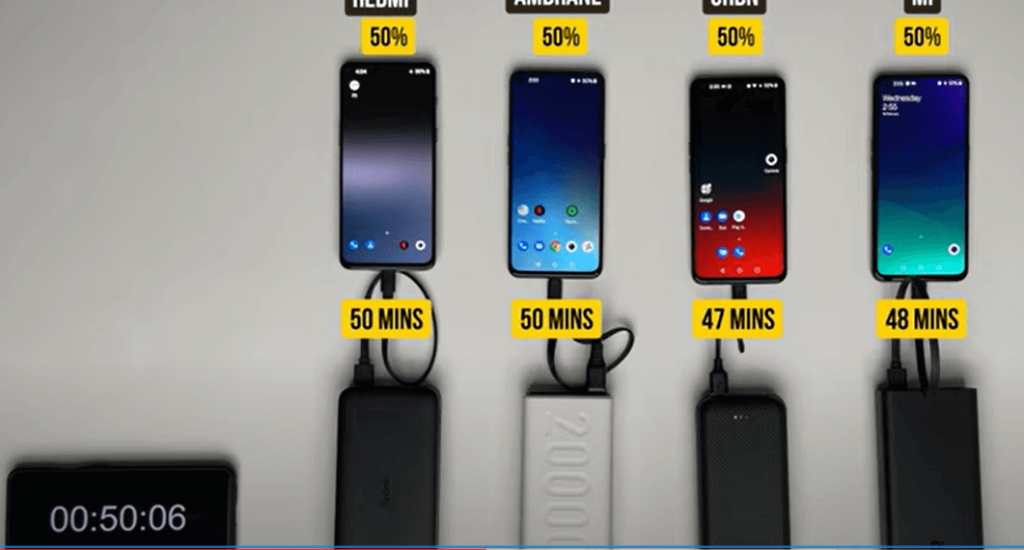 For doing this test, we have four iPhone 12 phones and discharged them completely to 0% and we will be charging them to 50%. We will see which power banks finishes the charging first.

After completing the charging to 50%, you can see below that Mi, URBN and Ambrane have performed really good and they have charged the phones within 30 minutes.

However, the performance of Redmi was slightly average as it took almost 41 minutes to charge the iPhones till 50%. This is because, you don’t get a USB-C power output with this power bank. 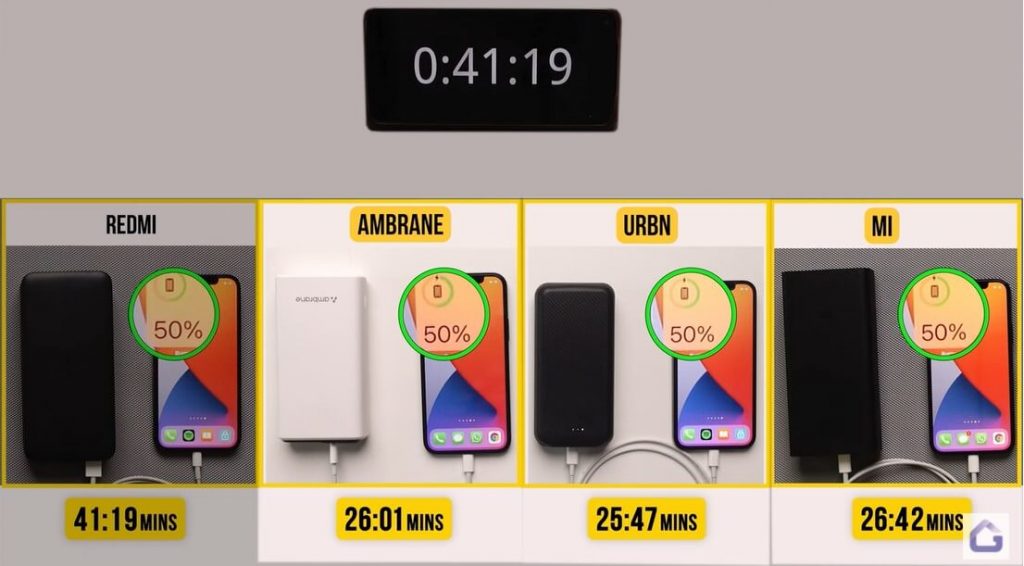 For performing this test, we have taken MI 18-watt charger. And using this charger, we will be going to charge the power banks respectively till 100%.

We will be checking the performance of the power banks at every two-hour interval.

At 4-hour interval, Redmi, Ambrane and URBN have charged up to 75%. However, MI has got charged just 50%.

After continuing the test to know which power bank is fully charged at minimum time duration.

Now the power banks are fully charged. Redmi and Mi have performed great as they got charged within 6 hours of duration. However, Ambrane and URBN took almost 7 hours to complete the charging which slightly more time compared to the other two. 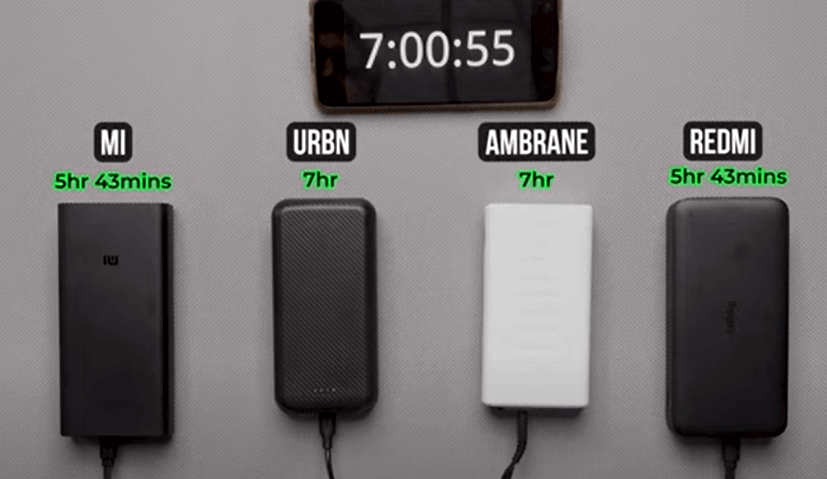 Along with this test, we have also performed a heat test to know which power bank is hot to touch after getting charged. 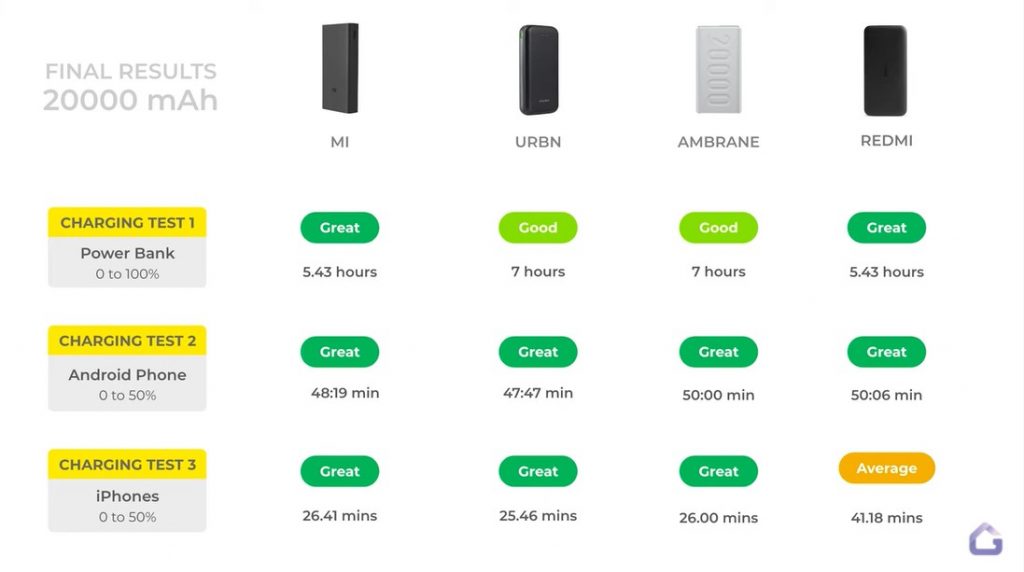 After performing all the test and personal observation, we recommend

#1 choice as MI Power Bank as it performed great in all the tests. And it was not only having the fastest charging speed, it also took least amount of time to get fully charged.

When it comes to the other power banks, they all performed good as well and didn’t not have any major variations.

Power banks are lifesavers when you have to travel long distances. Apart from smart phones, they are also helpful to charge other necessary gadgets as well.

With so many models, it can get quite confusing which one to purchase. And moreover, investing blindly may result in wrong purchase and waste of money.

So, in this article we have shown you the best power bank 20000mAh by performing real-time tests at our workshop.

We hope the information provided here was helpful in taking wise decision. If you still have any queries, write to us in the comment section below.