Weighing scale is one of the essential accessories in your weight loss or fitness journey. It helps you monitor the changes closely and keep a track of your fitness regimen.

But with so many options in the market, it is a challenging task to choose the right one. To help you, we performed several hours of real-time testing on 5 best selling weighing scales in India for accuracy, stability, durability and quality.

Based on the results, we have provided prioritized the list in terms of best performing in the first and least performing at the last.

Best 5 Weighing Scales in India from Top Brands are

In this article, we will show how we performed analysis on these scales with clear pictures. The two priority tests we are going to compare are –

Disclaimer –
All these products are picked based on their merits during the testing process. None of them are sponsored and we are not against or in support of any brand.

So, now let’s check out the review of each weight scale. 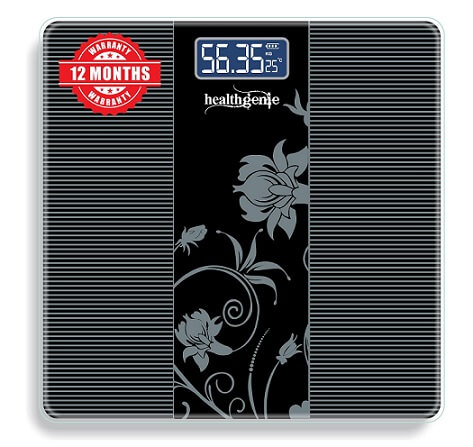 Design – This weighing scale has dimensions 26cm (height) x 26 cm (width) x 2 cm (thickness) which makes it small and compact. It has tempered glass layer with black and printed finish for an attractive look. This weighing scale is light in weight as it just weighs 980 grams. So, you can easily carry it anywhere without any issues.

Display – When it comes to display, it shows three different insights. In the middle, you can see the weight readings, room temperature to the bottom right and battery indicator to the top right.

Room temperature is available with certain weighing scales as the weight readings can vary vased on it. So, it is usually recommended to check the weight at the same time every day as the temperature at that particular time is mostly similar.

And the drawbacks we have seen in this model are the small display and no backlit feature. This can make it a bit difficult to check the readings in dim lighting conditions (early in the morning or at nights).

Warranty and Cost – It comes with 1-year warranty duration and costs under Rs 1000 in Amazon.

We asked two people to step on the weighing scale for two times in a row to check if it shows similar reading. During the test, Healthgenie weighing scale has provided consistent weight readings both the times.

In this test, we asked two people with different foot sizes to step on and off the weighing scale.

Overall, healthgenie weighing scale has shown consistent readings in our test but it didn’t perform well in the stability test. 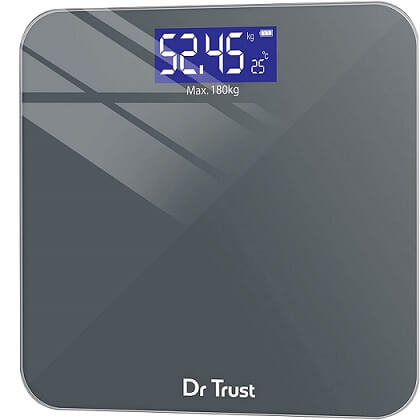 Design – This weighing scale has dimensions 26cm in height and 30 cms in width which is still compact enough. It weighs around 1.5 kgs so this weighing scale is slightly on heavier side compared to Healthgenie model. It has thick tempered glass surface which sturdy and durable.

Display – It has three different readings on the display similar to the above model. In the centre, you can see weight readings in large font size. And to the bottom right, room temperature is provided and top the top right, you can see the battery indicator.

Because of bright LED display, blue backlight feature which lets you see the readings even in dark or dim lighting areas.

Battery – When it comes to battery, it comes with 500mah which can be charged using the micro-USB port present at the top of the weighing scale.

Warranty and Cost – It comes with 6 months warranty duration. And this weighing scale comes under Rs. 1500 on Amazon.

During this test, two people stepped on it for 2 times in a row. And when it comes to results, it performed well as it has shown consistent readings both the times.

It performed well and was stable when people with different foot sizes have stepped on it.

In a nut shell, Dr Trust weighing scale has good and durable build quality. And it has also performed quite well in both accuracy and stability test. 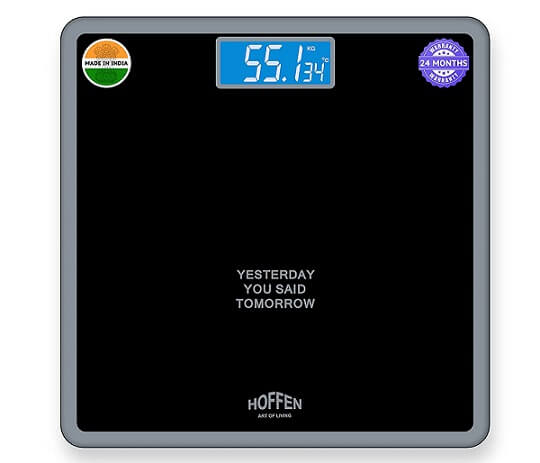 Design – This weighing scale comes with 28cm (h) and 28cms (w) dimensions and thickness of around 3 cms. It has a durable and thick tempered glass surface.

Display – It comes with a bright LED display so you can see the readings clearly even in dark or dim areas. It shows weight readings at the middle and room temperature at the bottom right. Unlike the above-mentioned two models, it doesn’t come with battery indicator.

Battery – When it comes to battery power, it comes with 2 AAA batteries which lasts pretty long.

It has shown consistent results both the times when two people stepped on it consecutively.

In this test as well, Hoffen was quite stable when two people different foot size and build stepped on it.

Overall, the build quality, accuracy and stability of Hoffen Digital Weighing Scale has proven worthy for the price. The only feature missing is the battery indicator. 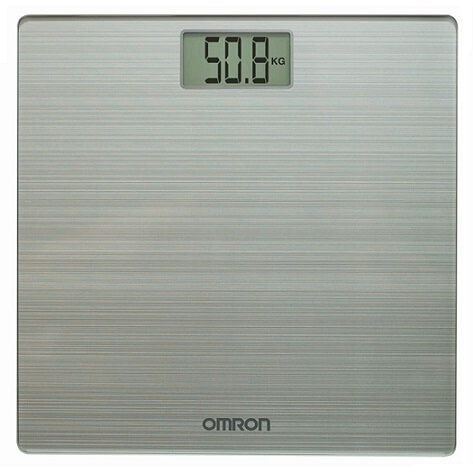 Design – It comes with dimensions of 30cm height, 30cm width and thickness of 1.5 inches. It is actually a bit larger compared to other products mentioned above. It has solid tempered glass surface which is quite sturdy.

Display – It has quite large display and display weight readings to the right with large font size. However, it doesn’t provide insights on room temperature and battery indication. It also doesn’t have any backlit feature.

Battery – It comes with a small coin battery which lasts lesser compared to regular AAA batteries.

Price and Warranty – Omron weighing scale costs around Rs. 1500 and has warranty duration of 1-year.

When two people were asked to step on it two times in a row, it shown slight variations and inconsistent results for both the people.

When it comes to stability test, it performed extremely well because of large foot space and build quality.

In a nut shell, Hoffen weighing scale has large foot size and stable but the results are not accurate enough. And moreover, it doesn’t come with backlit option. 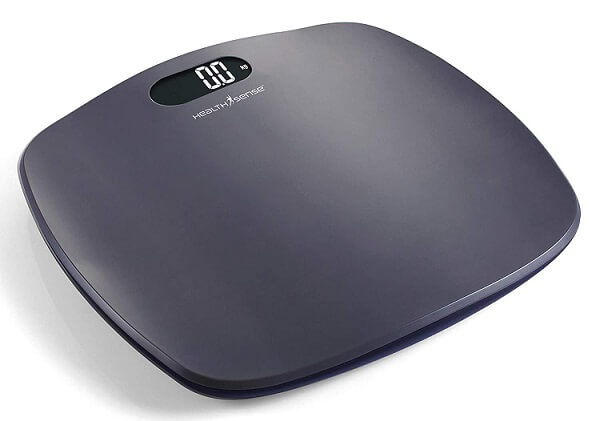 Design – It has dimensions of 31cm (h) x 31cm (w) and approximately 3cm thickness. It has overall ABS plastic build quality unlike the other products mentioned in the list of best-selling weighing scales in India.

Display – This weighing scale has a bright and large LED where weight readings are mentioned in large font size. However, it doesn’t provide any information on other insights like room temperature or battery indicator.

During the accuracy test, it provided consistent results for both people when they stepped on it for two time consecutively.

When it comes to stability test, it was quite jumpy and not stable for both small and large foot size people. So, it didn’t pass the test.

Overall, HealthSense weighing scale has shown promising results in accuracy. But the build quality and stability are not quite up to the mark.

During the accuracy test, Health Genie, Hoffen, and Health Sense performed great. So, these are the most reliable options in terms of accuracy.

When it comes to Dr Trust brand, it has shown weight reading more than the other weighing scales. Generally, if the different between the weights shown in the weighing scales have a difference of +/- 100 to 200 variations – which is considered normal.

But the difference with Dr Trust weighing scale was +/- 350 grams which more than the normal variation. So, it is considered as less accurate.

Coming to Omron weighing scale, the accuracy performance was average as the readings were different every time when a person stepped on it for consecutively for two times.

In the whole analysis, Health Genie, Hoffen and HealthSense are considered to be the pick 3 picks as they were accurate and come with amazing features. 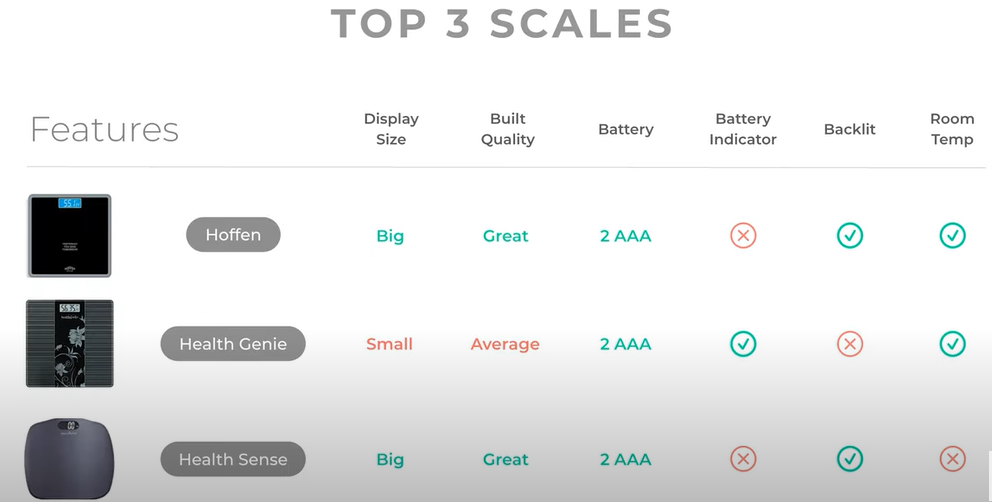 This was the detail analysis of the best weighing machines in India. As you have read the whole analysis, let us know which weighing scale are you interested to buy.

And if you want us to analyse any other product, please let us know in the comment section below. You can also write to us your queries or concerns on the same.